Share All sharing options for: Rangers Analysis: The Curious Case of Stephen Valiquette

I argue the fact that the backup goaltender on any hockey team has more of an effect on the starting goaltender than any coach or former goalie could ever have. Why do I think that? Well, it's as simple as Jaques Plante puts it, which is that "only a goalie can appreciate what a goalie goes through."

The situation with Steve Valiquette playing backup to Henrik Lundqvist is a situation that most (if not all) Ranger fans are perfectly fine with, especially with his play in Sunday's win against the Ducks. Vally understands and accepts his role with the Blueshirts, he works hard to make sure he is ready at any moment of the season, and above all he has (reportedly) a great relationship with Hank. All seems fine and dandy, but what I find more curious is the play of the team as a whole in front of Steve Valiquette. In general, when it is known that Vally is starting in place of Henrik, it seems as though the team plays better as a whole (especially defensively). Some argue that there could be a "rally the troops" mentality among the skaters of the team; but after some basic research into Vally's stats last season, it appears that the team playing better when Vally is in goal isn't necessarily the case. 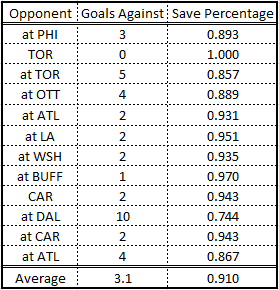 As you can see, those numbers are solid but not astounding to make the point that the team plays hands down better when Vally is manning the goal. The Rangers let in 218 goals last season, at an average of 2.66 per game. Vallys' GAA is clearly above that at 3.1, but let's see what happens when we remove that absolutely brutal Dallas game which was a horrible team effort all around. Exhibit B: 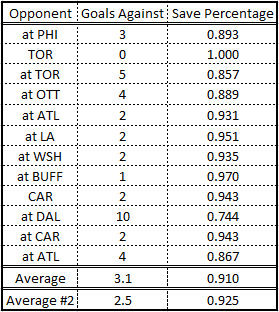 Valiquette's stats experience over a half-goal drop in GAA (which is now under the teams mind you) and a nice jump in Save Percentage (Average #2, obviously). So maybe there is something to the theory, but with evidence pointing to both sides, it's basically inconclusive.

What I can tell you from experience as a player and coach is that when a backup goalie is in the game not much changes from your personal view of the game. Sure, when you hear the backup will be playing you realize that the competition must be not up to your level (unless someone is injured), but that only makes you focus on the task at hand because you know that a loss is almost unacceptable because of the circumstances. In fact, if the backup goalie makes a couple of mistakes, it is easy for he (or she) to quickly become to scapegoat in a loss that shouldn't have happened. This hasn't really happened to Valiquette, but its just the nature of the game.

The bottom line is that Stephen Valiquette is a great number 2 goaltender for the Rangers. He apparently isn't top ten material according to The Hockey News, but I think in all our minds we are glad to have Spiderman Steve watching over King Henrik's city.