"Your arena isn't even in Ottawa"

Share All sharing options for: "Your arena isn't even in Ottawa"

Authors note: I was at Scotiabank Place Saturday afternoon to witness the Rangers 2-1 shootout victory. The following is not necessarily a story or anything; it's just the latest installment of a trip me and my friends do every year. This was our third year doing to the trip and the first year the Rangers have won, so once again the weekend didn't disappoint. Join me after the jump for a quick timeline of the trip, and then I'll tell you why Ottawa is a great place to catch a Ranger game.

The group has changed every year, but the four core members always stay the same. Those are myself, my roommate from college (Sens fan), and two of our older buddies from back home (both Ranger fans, one of which was my coach from youth hockey until college off and on). We had a great group this year because we added another older friend and a friend our age which gave the group a good mix. Were all hockey guys, all single, and all just looking for a good time. I cannot stress this enough to people trying to plan a trip: DO NOT bring the "in-love"/whipped boyfriend along. He will drag you down when it comes to the nightlife portion (you don't go to Canada to sit in the hotel room in my opinion).

The game was set for 2 pm, so the cocktails (and by that I mean Moosehead's) started around 11:30 am in the Scotiabank parking lot. We got lucky with the weather this year as it was about 40 degrees with some wind, but compared to the 2008 game it was a blessing (temps around 5 degrees, snow, wind - just a mess). A key we have found is to buddy up with the parking attendants, as they will let you get away with almost anything if they think you will listen to them. We got as close as we could to the arena and actually got the attendants to designate, as they put it to us, a "party zone." As an hour or two roll by more and more people are stopping to have a beer with us, and in the end it was one of the better tailgating sessions I've ever had. As one of the group members put it, "You know were doing it right when they have to come out and threaten to remove us from the lot."

The game, which was apparently a good one on tv, seemed a little boring for periods at a time. The lowest was the second half of the second and the first half of the third. The OT and shootout were great, and we obviously had a ball. Plenty of Let's Go Rangers chants were started as we had Blueshirts scattered in different sections around us, along with screaming "MARION GABORIK" every time he touched the ice (think like how Rosen used to say "Jaromir Jagr!")

Scotiabank Place is actually located not in Ottawa but in Kanata, Ontario, which is about ten to fifteen minutes outside of the city. Kanata itself is great, plenty of shopping, bars (which turn into dance-clubs essentially), and women for those who are young and single. There's nothing like going downtown in a nice city like Ottawa, but the majority of both Friday and Saturday night this past weekend were spent in Kanata. Friday night we went out, had too much fun, but no-body got hurt. Saturday night started after a mandatory hot-tub then pool session, and then we hit up Kanata again. Only I and one other made it to downtown Ottawa Saturday, but the key is hitching a ride. We were lucky enough to find three lovely ladies who wanted to head downtown for a bit, so we latched on. The cab fare is anywhere from $50 to $80 just one way to downtown Ottawa, so that is something to take into consideration. Either way, morning came the next day and the two cars went our separate ways. It was the smoothest trip yet (we've had bad weather, fights, and some other problems), and I think it will really set the bar for trips in the future. 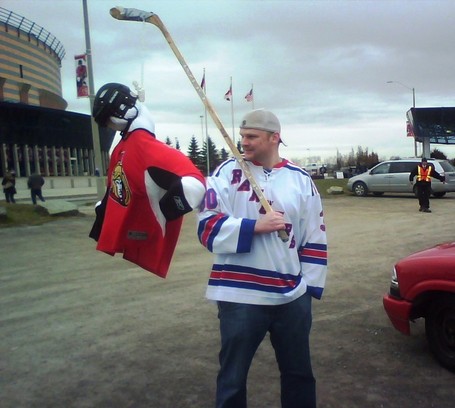 "This is my buddies Sens jersey, I didn't tell him what I was using it for..."

Sens fans are great. Very friendly and for the most part not hostile (we will get to what caused the title of this story in a second). They will break your balls about the Ranger jersey or just boo you, but everyone has smiles on their faces. One of the great parts about going to an away game that isn't at New Jersey or the Islanders is that when Ranger fans see each other you suddenly have another best friend. Young or old, Jersey or t-shirt, the person wearing some sort of Ranger blue or white is part of the club.

After the game we ended up back at the car waiting for the traffic to clear. We were outside doing a post-game tailgate when these (hammered drunk) Sens fans saw us and starting taunting. We took it in stride just like all day as we figured they were kidding, but when we saw one spit at the feet of one of the members, tempers flared. Somehow, because we weren't from New York City, we weren't real Ranger fans. This prompted the absolutely golden response that is the title of this article; "Your stadium isn't even in Ottawa!" Everyone went our separate ways, but in true New York fashion we got the last laugh.

Ottawa and Kanata is just a great area in general. Everything is clean, safe, and of good quality. I've been to games (recently) in Montreal, Boston, and Buffalo; and it's the easiest for me to say Ottawa is the place I feel the safest. The best part, to me, is that because you're in Canada and you say you're here for the hockey game, everyone knows what you're talking about and wants to hear more. I saw Flames jerseys, Penguins jerseys, and even a Nordiques jersey; it just seems that in the end most of the fans are there for the hockey, which is great.

So that's the story. Three years in and I really think our little trip will be an annual thing for plenty more to come. If you are young enough to be able to do almost whatever you want on your weekends, I highly suggest trying to setup an annual getaway like this. I'm in the middle of the hardest and busiest semester of my life, but when last Friday finally came I had not a worry in the world because I was in another country. Worried about the financials? I did this whole trip with under $200 American. Everyone wants to go to the Garden, as I plan on making an appearance this spring, but experiencing an away Ranger game in a nice city is one of the most fun road-trips you can make as a Blueshirt fan.