Not much news this morning as the Rangers are in transit to Vancouver for their game against the Nucks tomorrow night.

From Andrew Gross at Ranger Rants:

Everybody who was at the Garden today for the Rangers boarded the charter plane for Vancouver - that means you Dane Byers. It doesn’t sound like Donald Brashear (right hand/wrist) is improving much and the Rangers are going to need Byers grit in Western Canada. Another thing to keep an eye on: Enver Lisin. The slick-skating left wing blocked a shot with his foot and was limited afterwards.

Also, don’t know if you noticed, but Christopher Higgins, even though he didn’t score a goal - again - and had two shots, played probably his best game with the Rangers. He was tremendous on the penalty kill and in general defensively. Which was a change for him compared to his last six, seven games. Ales Kotalik, too, played "stiffer," in Tortorella’s words. Meanwhile, Callahan had a team-high six shots, double the next highest total by both Gaborik and Brandon Dubinsky, who also reversed his recent sluggish play.

There was also much discussion of the Avery boarding call and the non-call against Chara, who smooshed Callahan against the glass just minutes later like Callahan was a bug to be eradicated.

"It’s not a penalty," Tortorella said, point blank, about the call on Avery.

And if that’s a penalty, Tortorella added, then the Chara one was as well.

According to the Boston Herald, Zdeno Chara gave Sean Avery a "stern talking to". He also attempted to send Avery to bed without supper, but it's a violation of the CBA.

Puck Daddy has a great look at the goalie mask on its 50th anniversary.

In the NY Post, Larry Brooks says that for at least a day, "Safe is Life"

If The King had been spoiled by the Blueshirts' early-season outburst -- they scored 32 goals in their first eight games while opening 7-1 -- removing Marian Gaborik from the lineup for a couple of games should have corrected the netminder's attitude.

The fact is, if not for Gaborik, who returned after missing two games because of a knee injury and scored the lone goal at 15:51 of the second by converting Vinny Prospal's neat left wing feed with a one-timer that beat Tim Thomas through traffic, safe might have gotten the Rangers nothing, either on the scoreboard or in the standings.

This is a couple of days old, but Hulkamania is running wild at Ranger games. I readily admit to being one of those 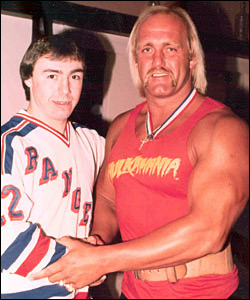 wrestling geeks in the 80's, and while Hulk was never a favorite of mine back then, he's grown on me as the years go by, probably more out of nostalgia than anything else. Plus, let's face it, his daughter is not so tough on the eyes.