Authors Note: Welcome to the Notable Prospect Update which will give a quick statistical update of the more intriguing Rangers prospects in the system. This list is not set in stone so please do not panic, just leave a comment with the name of the prospect and I'll add him to the list (I want to keep it under 15 or so). In the end I think it's safe to say we are all more interested in the big club, but it's always good to keep one eye on the road ahead. It should also be mentioned that I am making assumptions from looking at stats, and that I have not watched any of the games I mention. With that said, enjoy.

With the month of October in the books, it's time to look back at some notable Ranger prospects to see how their season has gone thus far. I have a list of eleven players who, for the most part, are some of the more popular Ranger prospects because of their skill, story, draft position, or in one case last name (take a guess). Could I list every single prospect with upside and put their stats down? Sure... but if you're that big into the prospects you can do that yourself (Jim, Joe, and I do have lives, ya know! - j/k - but we do have lives...). This is essentially the Rangers Prospect Update/Guide for dummies. I tried to give the list a nice mix of AHL, NCAA, and CHL players which yielded six forwards, three defense, and two goalies. Let's take a look at the fancy chart shall we? 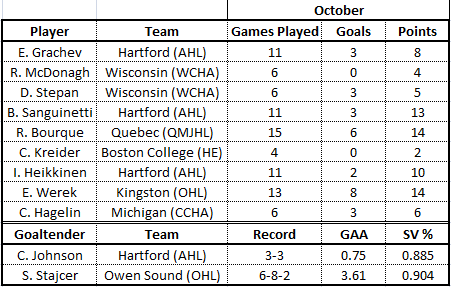 So what do you guys think of some of the young gun's thus far? I'm particularly happy that Ryan Bourque is ripping up the QMJHL, but at the same time I'm a little worried about Chris Kreider starting off a little slow with BC in Hockey East. I have a feeling he will come around though. Anyone been to any Hartford games? I'll have to look up if the Rangers have any ECAC prospects to keep an eye out for as I work in the Penalty Box for Clarkson games. Either way, sound off in the comments.