Ulf Nilsson Back On Broadway

Share All sharing options for: Ulf Nilsson Back On Broadway 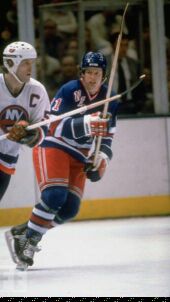 This past Saturday I had a chance to talk to one of the best pure passers that the New York Rangers have ever had, Ulf Nilsson. Ulf, who now lives in Sweden, was in Manhattan this weekend as part of a promotion that included 150 of his countrymen, all of whom were Swedish radio contest winners whose prize, in part, was get to see a Ranger game with Ulf.

The entire grand prize included airfare, a weekend in New York City, as well as tickets to attend a Ranger game to see Henrik Lundqvist and Henrik Zetterberg play. Over 40,000 people entered the contest.

Ulf, who average almost a point a game in his four years as a Ranger from 1978-1982, was hampered by injuries most of his time here with the Blueshirts, injuries which still plague him to this day, especially his knees and lower back.

At Age 59, Ulfie is still youthful in his demeanor and remembers his time as a Ranger fondly. I was astonished at his recollection of particular plays where he set up goals, such as one in particular that lead to a Ron Greschner tap in goal directly off a faceoff.

Ulf assured me Ron would remember the play if I asked him about it now thirty years later. I don’t doubt Ulfie for one minute, his memory, his graciousness and mind are as sharp as his passes used to be when skated for the Blueshirts.

Here are some quotes from the nice chat I had with Ulf.

On Fred Shero:  "Fred was laid back and was great to me and Anders. He always made sure he put us out on first line ahead of all the other lines, no matter what other Rangers previous status to us coming here, because we never took a shift off, we always gave it our all."

He and Anders Hedberg coming to New York:  "We really got the ball rolling with putting fans back in the seats as far as sellouts go at Madison Square Garden back in 1978.  It was great to be a part of that.  Also, in my four years here we lost to the eventual Stanley Cup champion in the playoffs every year.  I played on some very good Ranger teams."

Ulf’s philosophy on and off the ice:  " When I was on the ice, it was all about the game, nothing else was in my head. I always took pride in my faceoffs. I wanted to win every faceoff.  If I would lose a draw, I didn’t let it get me down.  I knew there would be a next time.  I took the same approach to my overall game.  You can’t change what happened in the past or predict what’s in the future but what you can do is definitely control the present and that’s how I approached the game as well in life."

On John Davidson:  "J.D was a great person.  He made sure myself and Anders were part of the team off the ice as well.  J.D was excellent at bringing the players together for gatherings when we weren’t at the rink. The Ranger teams I played on were a close tight knit family on and off the ice."

On Bobby Hull:  "Playing with Bobby in Winnipeg (WHA) was great.  He knew how to work the crowd and get them excited.  He would stay after games and sign autographs until every fan had one."

Views on Coaching : "You can’t coach through fear, especially young players, if you go that way you have players out there afraid to take chances and play their game because they are scared to make mistakes."