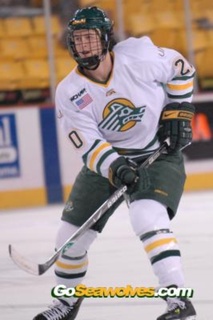 He'll probably go to Hartford to finish out the season. Sounds like a big guy who can put the puck in the net. If I find anything else out about him I will let you know.

Here is the official press release from the Rangers.

Crowder, 24, skated in 35 games with the University of Alaska-Anchorage Seawolves of the Western Collegiate Hockey Association (WCHA) this season, registering 14 goals and 19 assists for 33 points, along with 44 penalty minutes.  He established career highs in goals (14), assists (19), points (33), and penalty minutes (44).  Crowder led the team in assists, points and shorthanded goals (two), tied for second on the club in goals and finished fourth in penalty minutes.  In addition, the Victoria, British Columbia native tied for first on the Seawolves with six power play goals, two game-winning goals and a plus-11 rating.

The 6-3, 202-pounder has skated in 107 career WCHA games with the University of Alaska-Anchorage Seawolves, recording 32 goals and 48 assists for 80 points, along with 80 penalty minutes.  In 2006-07, he tied for the team lead in goals (11), ranked second in points (24) and tied for third in assists (13) as a first-year player.  Prior to attending the University of Alaska-Anchorage, Crowder appeared in 119 British Columbia Hockey League (BCHL) contests over three seasons with the Powell River Kings, Coquitlam Express and Burnaby Express, registering 36 goals and 83 assists for 119 points, along with 122 penalty minutes.  He established BCHL career highs in games played (58), goals (19), assists (39), points (58), and penalty minutes (57) while skating with the Kings during the 2003-04 season.  Crowder also recorded one goal and three assists for four points, along with two penalty minutes in seven BCHL playoff contests with Powell River in 2003-04.