Why Sean Avery Didn't Work Out In Dallas

Share All sharing options for: Why Sean Avery Didn't Work Out In Dallas 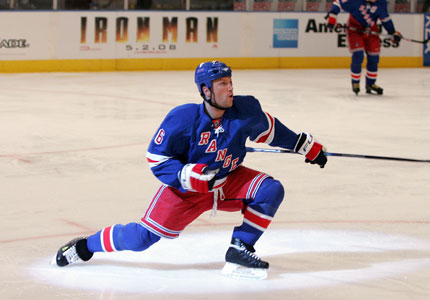 (Editors note: this is a follow up to the story we ran last night from the Dallas Morning News)

The question needs to be asked. Sean Avery is a perfect fit for the Rangers, yet he was such a disaster with the Dallas Stars. Does a change in scenery really make that much of a difference for a player? Apparently it does when it comes to Sean Avery.

Brett Hull had good intentions when he signed Avery. He wasn't the only GM who had interest in him either. Avery was somewhat of a hot commodity when he became a free agent. Of course there were some teams that shied away from him because of his reputation and his ‘antics’. But there was also definitely a group of teams that considered him a viable option and were interested in what he could  bring to them. So right off the bat all the blame cannot be put on Brett Hull.

Avery is a solid hockey player. People w/o any real knowledge about him would say that he's nothing more than a punk and a goon, but those people are morons and have meaningless opinions about the matter. In reality, Avery is not only capable of bringing an edge to his game that very few NHL caliber players can, but he's also very fast, injects energy to the team, is a playmaker and has a scoring touch. When you look past the baggage he brings and the negative cloud that surrounds him, he’s a very valuable player for a team to have.

Despite the positives that Avery’s game has, Brett Hull never should have signed him. After all, Sean Avery isn’t who he is without the suitcases of attitude and personality he lugs around with him. Also, unlike with the Rangers players, the Stars had a past history with him. They experienced him on the wrong side of the tracks when he was with the Kings and the Red Wings. Avery also had his share of scuffles and fights with Stars captain Brendan Morrow. It's more than likely that the Stars players didn't have an open mind when Avery stepped into the locker room.

Of course there has to be some blame on Avery. He went over to the Stars and inflated his attitude and persona becoming too much of an asshole way to soon in his new environment. But at the same time, the Stars players need to share the blame with him and Brett Hull. They for all intensive purposes used Avery as a scapegoat for their atrocious start to the season and for some reason, the media allowed them to do so.

Because of this, the Stars players own just as much blame as Avery does. They didn't try to accept him in their locker room and took the easy way out for their bad performance (remember hockey is a team sport) by allowing Avery to take blame for what was happening. Even though at the time he was playing with the Stars, Marty Turco couldn't make a save and the team itself was playing terrible hockey. Sean Avery was not the reason why the Stars had such a bad record when he was with them. The Stars players simply used him as an excuse.

Coincidentally, when Avery left the team for his absurd 6 game suspension and also to seek mental health, Marty Turco remembered how to stop the puck. Not a coincidence, with Turco playing better, the Stars started winning. The Stars are a professional hockey team, they don't have to like Avery off the ice, but on it, it's business. Not only that, Avery might have just been too big for Dallas. New York allows for big personalities and they also love the agitating style Avery brings to the Rangers. It was a square peg in a round hole for him with the Stars.

Even though Avery cannot be considered a success in his second stint with the Rangers just yet, if this sample and his past play is any indicator, it will be. The Dallas Stars loss is the Rangers gain. Sean Avery for half the price? Thank you Dallas.