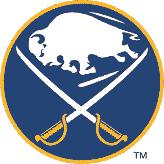 Sabres Blog on SBNation: Die By The Blade

The Rangers are rested, having not played since Tuesday, and are playing a Sabre team that played last night. Rangers need to come out fast at home tonight, no excuse for being flat.