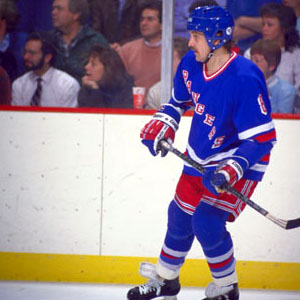 Former Ranger Walt Poddubny has died at the age of 49.

The cause of death was unknown.

Drafted 90th overall by Edmonton in 1980, Poddubny played 11 NHL seasons for the Oilers, Toronto, the New York Rangers, Quebec and New Jersey. He had 184 goals and 238 assists in 468 games and topped the 30-goal mark three times.

Poddubny was arguably the Rangers best player for the two years he was with them, scoring 78 goals and 97 points in those two seasons.

He was traded by the Rangers to Quebec in 1989, and spent 3 years with the Devils before retiring.

Poddubney also played a few season in the RHI (Roller Hockey), before becoming a coach in the WCHL.