The Rangers and Thrashers are getting ready for their game tonight, and here are some stories making headlines for both teams:

Our friends at Bird Watchers Anonymous have the post-mortem on another season out of the playoffs in Atlanta. As fans of a team that had a recent run of 7 years without making the playoffs, we can certainly relate. 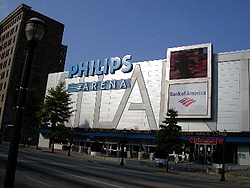 The Examiner takes a look at Atlanta's position in the race for John Tavares.

Mike Knobler says the Thrashers still have a lot to play for.

Nik Antropov says nothing against the Maple Leafs, but the Rangers are a closer as a team. Good story; and I owe the guys at Pension Plan Puppets an Antropov piece.

Although the Rangers play with the man advantage has improved, it's been stagnant the last few games, and John Tortorella is concerned about it.

The guys at The Bleacher Report just love Sean Avery, it seems like every day there is a new story about him, and today is no exception. I wonder if our own "AveryGod" works there.

Obie over at the Daily News says the Rangers have a hard road ahead.

For my money, tonight is an absolute crucial game for the Rangers to win. I want to see them come out tonight; boot firmly placed on the Thrashers throat, and not let up. In case you haven't looked, the schedule gets pretty brutal from here on out, and I don't ever recall them having a tougher homestretch schedule than the one they will have after tonight:

In case you haven't looked at it, here it is:

April 9th and 12th: home and home with the Flyers

I don't think it's pessimistic to say the Rangers are probably looking at 4-3 over those 7 games; Boston, Jersey, and Philly are very tough at home. The one thing working in the Rangers favor is that the only team behind them playing well is Ottawa, and they are probably too far out at this point to get into the Top 8.

A win tonight will give them an identical record with the Penguins heading into Saturday's showdown at the Igloo. These are two very important points for the Rangers tonight; they have to go get them.