Share All sharing options for: Sean Avery vs. Marrrrrrty Brodeur 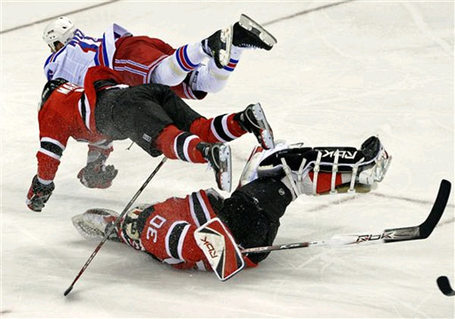 The Devils are relatively irrelevant in their home state (I would know I live there and yes I went there) and a good portion of their fans still think Scott Stevens is on the team. To say that the majority of Devils 'fans' are fair weather fans is probably an understatement (one more shot). Last year when the Devils lost Game 2 on their brand spanking new home ice, their 'passionate fans' threw beers onto their own ice at the Rangers players. Yes, they threw beer onto their own ice. When they got knocked out of the playoffs, the arena was half empty before the final buzzer sounded. The remaining Devils fans booed their own team. Want a comparison? When the Rangers got knocked out, they were applauded in front of a packed arena and the Rangers players responded by saluting the crowd.

Enough of that though.

As big of a game this is for the Rangers, the sideshow is almost as big as the matchup of the two rival teams. As much as it's Rangers vs. Devils, it's Sean Avery vs. Marttyy "Fasto" Brodeur. To be fair though, Marrtty did lose some weight on his season long vacation, he looks a little less chubby in the face. Good for him.

I dont really have too much to say today. Aside from the Avery BS (yeah I was real creative talking about that for 95% of this post) there's very little to say besides the Rangers absolutely have to win. With the tough schedule ahead (the toughest of the contending teams schedules) the Rangers have to play every game like it's going to determine their playoff hopes, because at this point, every game does