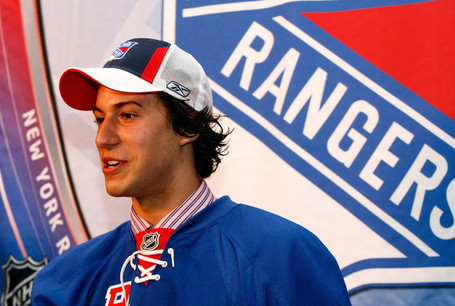 Here at Blueshirt Banter we pride ourselves in giving you all, our loyal readers, the best and most informative Ranger information out there. So it is my pleasure to introduce OHL update blogs. On my blog I usually post a quick little article once a week on how Ranger prospects Michael Del Zotto and Evgeny Grachev are doing in the OHL playoffs. And I am proud to tell you all that that will be happening here as well, so without further ado here we go.

Evgeny Grachev: Continues to impress Ranger scouts in the OHL. After his 40 goal 40 assist regular season stats-which were good enough to win him OHL rookie of the year-Grachev continues to put up numbers in the playoffs. In Grachev's 12 playoff games he has 9 goals and 10 assists for 19 points. Brampton has blown through most every series and Grachev is a big reason for that success. With almost a goal a game and well over a point per game he is the second highest point getter on the Battalion. Ranger fans should be licking their chops over this kid as he has proven many things, the biggest being that he can perform in the regular season as well as the playoffs.

Michael Del Zotto: Del Zotto has been on fire in the regular season since his mid season trade to the London Knights, and his playoffs have been no different. In 12 games the young defenseman has 2 goals and 16 assists for 18 points. These stats are very good to see, mainly because Del Zotto did not have a good playoff series last year. It is good to see him coming out to play in the playoffs, although I do wish he would pot a few goals. But I guess if I was on a power play with Tavares there would be no need to shoot either.

Anyway the stats from the two young draft picks are heartwarming to all Ranger fans as the future continues to look bright.

The Rangers AHL affiliate, the Hartford Wolf Pack, is also in their respective playoffs. Every week we will give you scouting reports on some of the highest scoring Wolf Pack players and other information we find vital. Expect to see Anisimov on the list constantly because he has the best chance of making the big club come October.

Artem Anisimov: The highly touted Wolf Pack center has two goals in his two playoff games thus far. Over a point a game player in the regular season the Wolf Pack, and the Rangers, are looking to see the kind of difference he can make in the post-season. A strong candidate to make the big club next year it should be fun watching him the rest of the way.

Dane Byers: At the beginning of the season Byers was thought to be one of the Rangers best prospects in the AHL. But after an early season ACL tear Byers was out of commission for all but 9 regular season games. Now back in action he has a goal and an assist in his two playoff games. Byers was one of the big boys playing in the AHL and his injury really hurt his chances at making a statement this year. But since he is back and 100% for the playoffs he might still be able to make a splash in the eyes of Ranger scouts. He is probably the most interesting case out of everyone on the team and we will keep a close eye on him here at the banter.

Jordan Owens: The young Ranger forward has a goal and two assists in his two playoff games thus far, leading the Wolf Pack with three playoff points. Good to see him playing a little better in the playoffs after a disappointing regular season in which he only had 12 goals and 25 assists in 67 games.

If you want more information on Ranger prospects, including the recent acquisition of Gilroy, then go Prospect Park where Jess Rubenstein has written a fantastic article about those prospects. Go on give it a read.