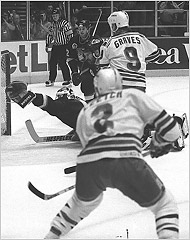 On this day in 1994, the Rangers swept the Islanders out of the 1994 playoffs with a 5-2 victory at Nassau Coliseum.

The Islanders jumped out to an early 2-0 lead with Steve Thomas and Dan Plante scoring on their first two shots on goal. The Rangers would come back with 5 unanswered goals, 2 from Mark Messier.

The Rangers would out score the Islanders 22-3 in 4 games. Islanders goaltender Ron Hextall would finish the series with a GAA of 6.08, surrendering 16 goals on only 80 shots.

You may remember Howie Rose's call on Messier's 2nd goal of the game:

"And here's Messier! Racing on a breakaway! Cuts in, he shoots -- he scores!!! And that, my friends, will BURY the New York Islanders."

The Rangers would then have a week off before hosting the Washington Capitals in the Eastern Conference Semi-Finals.

New to Blueshirt Banter? Well tonight, and during every Ranger game we have an open thread, fans can come in and post their thoughts on the game while its happening, so make sure you stop by!