Share All sharing options for: Artem Anisimov: A few thoughts from Andrew Gross at "Ranger Rants" 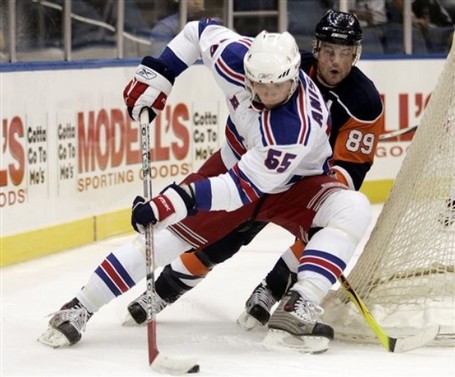 Blueshirt Banter:  Our readers will be thrilled to learn the Rangers finally called up Anisimov, they've been calling for it all week, its just too bad it took an injury to Betts to do it. Why do you think they were reluctant to call up Anisimov prior to this when they've obviously needed an offensive spark?

Andrew Gross:  The fans are not the only ones debating why the Rangers waited so long to bring up Anisimov - or another extra forward for that matter - it's been discussed in the media room since prior to Game 1.

I have two theories.

The first is that John Tortorella was just starting to feel he was getting comfortable with the players he had on the roster and he's stated several times he doesn't like extra bodies hanging around. Torts prefers playing his "top guys" and it was not likely a 20-year-old Anisimov was going to come in right away and be a "top guy" regardless of how ineffective guys like Nikolai Zherdev and, to a minor lesser degree, Nik Antropov, Markus Nasland and Chris Drury (because of injury) have been. So why, Tortorella might have argued, stunt Anisimov's development by having him ride the bench for the NHL playoffs instead of seeing significant time in the AHL playoffs.

The second is that Jim Schoenfeld, who knows the Rangers younger personnel better than Tortorella, simply told Tortorella Anisimov was not yet ready.

Remember, before Blair Betts got hurt, there wasn't really a spot for Anisimov (see theory No. 1).

BB: In your opinion, where do you think AA plays tomorrow night? I don't think we should expect to see him killing penalties, I assume that will falls on Drury and Dubinsky. Is it reasonable to think he'll be the 3rd line center tomorrow?

AG: Just trying to play coach here, and going on the assumption that Tortorella moves Dubinsky to center a second line, I still don't see Tortorella putting an untried rookie in his heavy rotation.

That said, I'd love to see a line of Zherdev-Anisimov-Antropov to see if their styles mesh.

I love Andrew’s idea on that last one, that might be just the thing to get Zherdev out of his big funk, and Antropov out of his mini one.

Thanks to Andrew for taking time out for us today!

Be sure and stop by Ranger Rants regularly if you aren't doing so already.