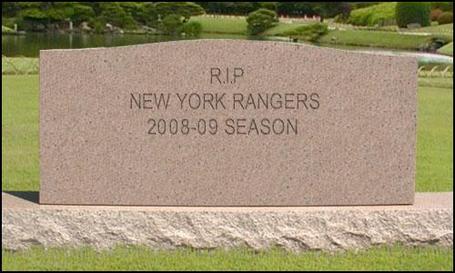 Despite the mid-season coaching change, despite the change in style of play, despite the acquisitions at the trade deadline to shore up the offense, the Rangers were unable to get the goals when they needed them in the playoffs, and in the end, it cost them a series they once held a 3-1 lead in, losing to the Capitals 2-1 in Game 7 of the Eastern Conference Quarterfinals.

From the onset, the Rangers rediscovered the formula that worked so well early in the series: good solid forechecking, keeping the Caps to the outside, forcing them to take bad shots, and relying on Henrik Lundqvist.

Nik Antropov put the Rangers on the board at 5:35, giving them the lead for the first time since Game 4. They continued to control the play for the entire period, taking the play to the Capitals for one of the few times in the series. The Caps were held to only 2 shots, but one of them took a bad deflection and got past Lundqvist, tying the game with at the 15:34 mark.

So after six games and two periods, it all came down to 20 minutes. The Rangers had to kill off an early penalty, and after that, the Caps began to carry the play. The Rangers were unable to muster much offense in the third, and after fighting off the Caps as long as they could, the air went out of the 2008-09 season when Sergei Federov beat Lundqvist with a shot over his left shoulder with five minutes remaining, sending the Capitals into the Conference semis, and sending the Rangers into the off-season.

So while the Caps get ready for the second round of the playoffs, the Rangers will prepare for an off-season filled with questions.

One final note, we hope you'll stick with us throughout the off-season, we'll be covering the rest of the NHL playoffs, as well as any other Ranger news. We'll also be looking ahead to the draft, and we hope to have some special surprises along the way. Thanks to everyone who has joined us so far, and we look forward to the future with you.