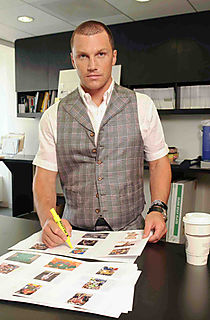 In case you hadn't heard, Rangers winger Sean Avery is now the part owner of Warren 77, a new bar and restuarant in the Tribeca area in lower Manhattan.

Avery's latest venture had its grand opening Friday night, and the New York Observer has a story about opening night.

Some of the highlights of the story:

Pro hockey's preeminent bad boy gave props to his partners, Chris Miller and Matt Abramcyk, for their four months of work in building out the space. Mr. Abramcyk told the Daily Transom the place was still covered with sawdust only hours before the grand opening.

"I don't get treated this nice at most places," said New York Post hockey writer Larry Brooks, whom Mr. Avery greeted with a clink of glasses and some good-humored teasing.

"You don't dress this nice at work," the former Vogue intern told the typically slovenly sportswriter, who showed up in a tucked-in button-up shirt and slacks.

Also, Henrik Lundqvist was in attendance, and played a few acoustic covers on his guitar to get the party started.