What Should The Rangers Do With Nikolai Zherdev?

Share All sharing options for: What Should The Rangers Do With Nikolai Zherdev?

One of the most difficult decisions Glen Sather is going to make this summer is whether or not he is going to re-sign or trade the enigmatic Nikolai Zherdev. He's due to be a restricted free agent this summer and will be owed at the very least, a 10% raise from the $3.25 million he made this past season. With the Rangers already pressed against the cap long term with their plethora of large, ill advised contracts, the Rangers cannot afford to swing and miss with Zherdev. Who despite all his talent, has never showed the desire needed to realize his potential. 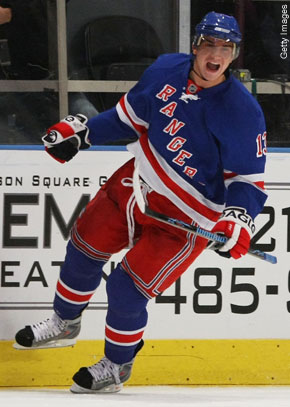 Zherdev is blessed with every talent needed to be an offensive dynamo. He has a combination of shooting prowess, speed, soft hands and vision that is similar to the likes of Ilya Kovalchuk and Pavel Datsyuk. Yet unlike his compatriots, Zherdev has yet to put together a season in which he played a full 82 games and put up the offensive numbers that reflects his talents.

When he was acquired from the Columbus Blue Jackets in a four player trade, Zherdev had a reputation of not being a competitor and taking games off. He showed promise in his first few months in New York where in addition to showcasing his offensive talents, he also looked like was committed to team defense. But just as it always has in his career, at some point Zherdev began to seemingly dose off and do his best Casper impression all too often. There were long stretches where Zherdev would stay on the perimeter and despite his all-starish set of talents, he was barely noticeable. During a stretch of 12 games in January, Zherdev only managed to score one goal. How does a player with Zherdev's talent only score one goal in a month?

In the first round of the playoffs against the Washington Capitals, Zherdev did his best Houdini impersonation of the year, completely disappearing for the entire seven game series. Zherdev was completely neutralized by the pressures of the playoffs. He didn't score a single point when the Rangers needed him the most and in the entire month of April including his horrid playoff performance, Zherdev only managed a single assist.

Zherdev is a tease. He has never realized his full potential and the cause is very likely to be that he has yet to put in the effort required to do so. Even though Zherdev has the talent to possibly become a perennial all-star, he has the desire that will keep him in the shadows of hockey obscurity. It's pretty obvious that Zherdev is not a John Tortorella player and the Rangers cannot afford to commit to a long term contract with a person of Zherdev's questionable work ethic. Even though he is still only 24 years old, the Rangers can use the money better elsewhere to sign either another free agent forward (keep those fingers crossed for Marian Hossa..) or to conserve money to ensure that they will have the cap space to re-sign Marc Staal next summer.

Either way, Glen Sather and the Rangers can ill afford to have another summer folly and re-sign Nik Zherdev. He is better off packaging him in a trade and allowing another general manager take the same risk as he did last summer hoping that something finally clicks and Zherdev realizes the amount of god given talent he has. If the Rangers cap situation was different they would be able to take a gamble on Zherdev and it would be a completely different story. But unfortunately, the Rangers don't have that luxury.