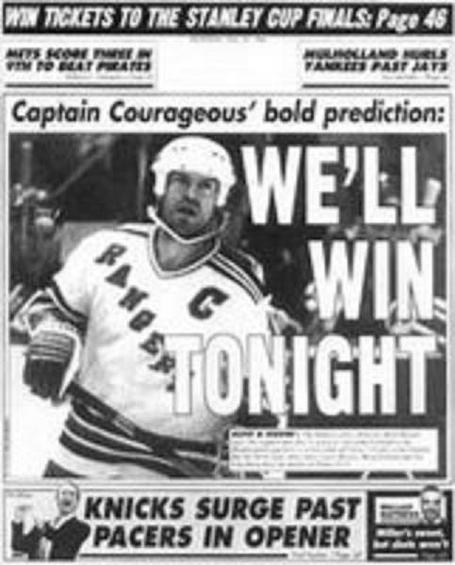 In 1994, I was an Assistant Manager of the Sam Goody store at the Ocean County Mall in Toms River, NJ. As an assistant manager, you usually get all the crap duty, which includes closing the store at night, which one some nights could take until well after 10 PM.

My boss was well aware of my love of the Rangers, and when the playoffs started, my schedule worked out pretty well that I was only closing on nights when there was no game.

The Rangers played 23 playoff games in 1994, I saw every one of them, except one. This one. The other assistant manager couldn't work that night, and after almost 6 weeks of having the schedule tailored for my hockey needs, I couldn't really complain, I had to work.

No TV in the store, and these were the days before internet and cell phones as we know them now, so my only lifeline to this game was going to be phone calls from my brother Jeff (schmied77).

I had my night at work all planned out. My brother would call with scores, I would drop the gates on the store as early as I could without catching hell, have the registers closed and money counted as fast as possible, I had a 10 minute ride home, I could probably catch the last half of the third period. My brother would be at my house watching the game even though I wouldn't be there, for superstitious reasons.

Of course the two big stories heading into this game were the "Curse of 1940" rearing its ugly head again, and Mark Messier's guarantee. The press loves a good guarantee (See: Namath, Joe, and Fassel, JIm), and they were eating this story up.

After the game started, every time the store phone rang, I would get nervous, wondering if this was an update, and what it would be.The first call came in 8 minutes into the game, Scott Niedermayer had given the Devils a 1-0 lead. 15 minutes or so later, the phone rang again, Claude Lemieux had put the Devils up 2-0 before the end of the 1st period.

After that, the phone didn't ring for a long time, business or hockey-wise. I was out of my mind with worry, and I was starting to think how seeing the Devils win the Cup (I was sure they would beat Vancouver) before the Rangers would just be unbearable.

Then I got the call that Alex Kovalev had put the Rangers on the board before the end of the 2nd period, and it was 2-1, going into the 3rd.

A few minutes later, the phone rang, and I launched into the company schpiel, "Good evening, thank you for calling Sa...."

Rejuvenated, now all I can think about is getting out of that store, and fast. As planned, I got the store closed up, and money counted in record time. On a normal night, when you closed the store at 9:30, you walked out at 10. But this was no normal night, and by 9:35 I was headed to my car.

My 1986 Pontiac Sunbird failed me when I needed it most, and left me sitting in the parking lot of the Ocean County Mall listening to one of the greatest games in Rangers history on the radio. I made a few phone calls for assistance, but naturally nobody was coming to pick me up until this game was over.

So there I sat, listening to the radio, cursing my car and all its ancestors, while Mark Messier made sports history by guaranteeing a victory, and backing it up with a hat trick. Messier put the Rangers ahead to stay with less than 8 minutes to go, and iced it with an empty netter with 1:45 left, and I sat screaming at the radio in my car all along in the parking lot.

Game Seven was going to be at the Garden two nights later, and I had the night off.

Thanks to ESPN Classic and the advent of the DVD, I've seen this game countless times now, and every time I do, I am reminded of Sam Goody and that damn Sunbird.

Here is a great video I found on You Tube that someone put together chroniciling Messier's historic night.