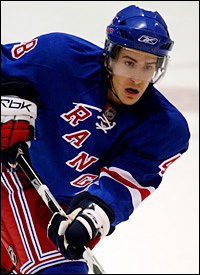 The Rangers announced today that they have signed 2008 1st round pick Michael Del Zotto to his first pro contract:

Highlights from the story on newyorkrangers.com

Del Zotto, 18, skated in 62 games with the Oshawa Generals and London Knights of the Ontario Hockey League (OHL) this season, registering 13 goals and 50 assists for 63 points, along with 78 penalty minutes. The two-time OHL All-Star finished the season ranked sixth among all OHL defensemen in scoring and assists, while his 50 assists tied for 11th in the league overall. He also ranked fifth in the league with 32 power play assists.

Busy day today, news-wise for the Rangers and the NHL.