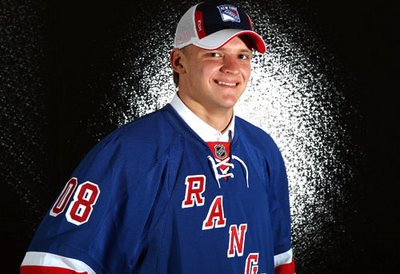 Prospect update time! Sorry for being a few days behind on this, but we wanted to let Evgeni Grachev play a few games before I gave you his stats. As you know his OHL team, the Brampton Battalion are in the OHL finals against the Windsor Spitfire. Grachev is the only Rangers prospect left in the OHL playoffs.

In 19 games thus far in the playoffs Grachev has 11 goals and 14 assists for 25 points. These numbers are fantastic on their own but they are slightly deceiving. A week and a half ago when I did my last update I wrote: "In 16 playoff games he has 11 goals and 13 assists for 24 points." This means that in his three finals games he only has one assist, so his production has tailed off. In Grachev's defense Brampton has lost two of those three games, so maybe the team was off.. I will keep you all on tabs with him but their season is coming to an end soon either way, so we will see.

I would love for him to put up more points, but he has done so well this post-season he gets a pass. The thing to remember is he is only 19, and getting better by the day. You never know he could put up 5 points in his next game.

We'll be covering all the Rangers prospects here as we go thru the summer, so make sure you stick around.