Share All sharing options for: Drawing the Battle Lines

Note: Any poor attempt at humor I make is not meant to be taken seriously.

On the heel of proving that the Atlantic Division has been one of the toughest in the NHL since the lockout, it got me thinking about our four division rivals that all of us Blueshirt fans loathe. I did not think of how each team will fair this coming season against the Rangers, but more like how much I dislike each team, and which team I dislike the most. It was really a personal battle for some time, but I have finally concluded who I really hate the most inside the Atlantic Division.

I must say one thing before I reveal my list, though. I've had many discussions about not just rivalries with the Rangers, but other rivalries across other sports as well. Over time, I and others have concluded that rivalries heat and cool like the weather, and that although there might have been a crazy time period in the past where the two teams mixed about as well as oil and vinegar, they may not be the hottest rival at the moment. A prime example of this is the Red Wings-Avalanche rivalry out West in the NHL. The fans still hype it up, but the players that made it one have come and gone for the most part. Will it re-kindle? I have no doubt; but at the same time I have no idea when. Along the same lines, generations grow up with different teams experiencing different levels of success, which also affected my rankings personally. Long story short; to each his own, but at the same time the Rangers are lucky to have four great rivals to get us through each long winter.

Without further adieu, here is my list on which Ranger rivals I hate the most; from least to most hated:

- Why They Rank 4th: For starters, the Rangers haven't met the Flyers in the playoffs for a while now, otherwise they might be occupying the Penguins spot higher on the list. Along with this, I like to give credit where credit is due, and I don't mind the physical and up-tempo style of hockey the Flyers play. Along with this, they consistently sell out their building, and when a sea of orange fills the Wachovia Center and chants Crosby Sucks louder than any building in the league, the Flyers make me not hate them for a couple of minutes. But that is it with Flyers Fans as for an upside, because most of them are so clueless about any other talent around the league. I have this one friend who is a Flyers fan. He thinks Kimmo Timonen is this generations Bobby Orr, which is hilarious.

- Why They Rank 3rd: I actually had a kid from Staten Island ask me this past winter if I felt bad that the Debbies were doing so bad this season. I laughed and told him that signing Rick DiPietro to such a contract was totally worth it. This is where the generational argument can come in, especially with any Ranger fans that lived through the Islanders dynasty lucky run of Stanley Cup victories back in the 80's. The Islanders have basically done nothing since the lockout (Oh they made the playoffs on the last day of the season last year... yee haw...), so it is kind of hard for me to hate them a lot right now. But ever since they actually decided to identify with Chris Simon a couple of seasons ago, I realized the Islanders flame of hate is still burning strong. As for Okposo and Park, I like them as hockey players, but I hate them as Islanders.

- Why They Rank 2nd: I do not like the Detroit Red Wings, but I have been pulling for them for the past two weeks. Sidney Crosby whines like a baby, Evgeni Malkin gets so ridiculously lucky on some of his goals (that stupid backhand shot that was #1 on SportsCenter was so lucky it's not even funny. Any hockey player knows about where the net is when they aren't looking at it, not exactly where it is), and Fleury is over-rated (that argument is getting old fast, I must admit). And as much as I hate the Penguins players, I hate Penguins fans even more. Half of them came out of the wood-work after Crosby was drafted, and few of them actually understand and know hockey. I dated a Penguins fan. She had one of those women-designed Crosby jerseys (not to mention a light-blue Lecavalier TB jersey); it goes without saying it didn't work out. Detroit in 7 LETS GO WINGS.

- Why They Take the Cake: It's the Devils, do I really need to explain myself? I could put up one of those Marty photoshop pictures all over the internet... Or make fun of how over-sized Colin White's visor is on his helmet (he looks like he's wearing a space helmet)... or I could just show Sean Avery beating the evil out of Clarkson. But no, I'm going to take the high road here along the gorgeous state that is New Jersey and just leave you with a photo that makes me smile any day of the week: 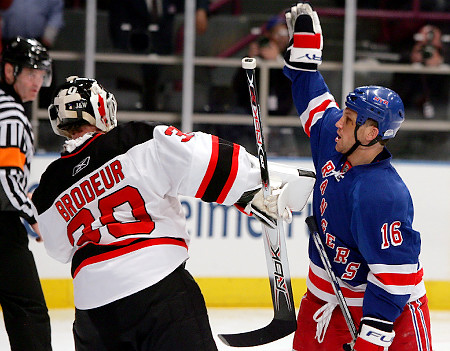 So who do you guys hate the most of all our rivals, and why? Does anyone actually care about the MetroIce Challenge? Upset that I didn't make any Charles Wang jokes? Vote in the Poll and let me hear it in the comments.