For this preview, we will take a look at our first defenseman, Ryan Ellis 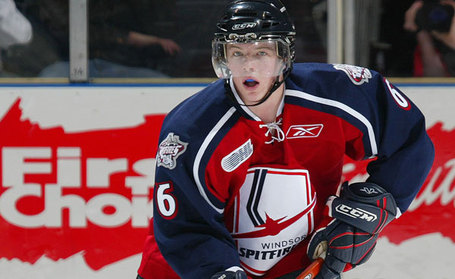 If Ellis was three inches taller, we'd be talking top five. He keeps answering doubts as many didn't even think he was big enough for Canadian junior hockey. He has tremendous puck sense and a lot of confidence. He can either make a great pass from the blueline on the power play or use a great shot. Defensively, he'll have to learn to use smart positioning, quickness and a strong stick but comparisons to Brian Rafalski are not totally out of the question.

Ellis finished the season with 89 points in 57 games, including 22 goals (11 of which were scored on the power play) and adding 67 assists. He finished second in the league with a plus-52 rating and he's added 31 points in 20 playoff games, including 23 assists. For his efforts, Ellis skated away with the Max Kaminsky trophy as the OHL's top blueliner. He also joined his WJC teammate P.K. Subban on the league's first All-Star team. But Ellis is no stranger to success. Last year, en route to earning a spot on the OHL's all-rookie squad, he had 15 goals and 48 assists in 63 games. Prior to that, Ellis' minor midget squad took the league's title.

Fourth offensive D-man pick in five drafts, blue line soon will be envy of the League.

Here is a video feature Sportsnet did on Ellis: