Ranger fan Mike Fornabaio wrote a great piece on Game 7, and what Ranger fans went through that night. It's perfect, so I am going to use it here: I really couldn't say this any better than Mike did, so why try? 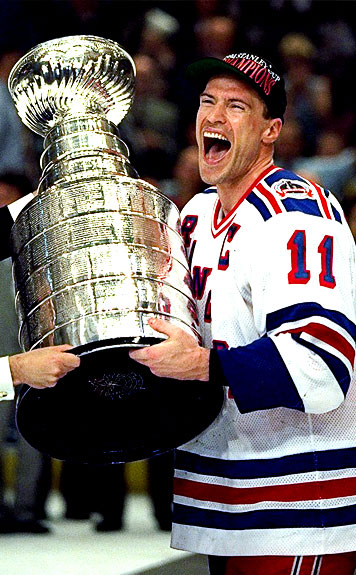 This day was all about eternities.

There was the eternity that took 54 years to elapse.

The eternity that it took for Saturday to turn into Tuesday.

And mixed somewhere in there is the eternity of waiting for Brian Leetch to shoot.

The net was a chasm, narrowing by the instant.

Mark Messier had blown by Pasha Bure on the right side in the neutral zone. He made a move to his left and dropped it off to Sergei Zubov, a play that drew everyone to the high right side of the ice.

Brian Leetch came into the zone and went to the left circle, untouched by anyone. Zubov had a wide-open passing lane to him. He used it.

Time stood absolutely, perfectly, heartwrenchingly still. Adam Graves picked off the defense at the top of the crease. Kirk McLean never managed to get across. And after another 54 years of waiting, Leetch drove it into the heart of the net, his 11th of the playoffs and a (by-a-defenseman record-tying) fifth in the finals at 11:02.

For the first time in five games, the Rangers had scored the first goal.

Three minutes and change later, with Jyrki Lumme in the box for cross-checking Craig MacTavish, it became 2-0, from a source unlikely in his unlikeliness.

Adam Graves had not scored a goal -- been stuck on nine in the playoffs -- since the first period of Game 3. Game 3 of the Devils series. May 19. It had been almost a month.

Adam Graves had been almost missing in action.

But again, Zubov set up the action, carrying through the middle. He flicked the puck off Murray Craven's stick to the left side to Alexei Kovalev, who streaked down the left side and fed Graves, wide open in the middle of the still-assembling box, in the slot. Graves went stick side. Beat McLean. New York 2, Vancouver 0.

They could feel it. Jeff Beukeboom injured his knee on a knee-on-knee hit from Shawn Antoski in the second; not wanting to leave, he remained on the bench though unable to skate. On the same shift, Nick Kypreos, in the lineup replacing the injured Joey Kocur, almost decapitated himself Brian-Leetch-in-St.-Louis style while trying to throw a check along the boards.

The lead held up into the second period, and the Rangers even had an early-second power play. But midway through that man-advantage, Leetch pulled down Murray Craven. Trevor Linden, coming off the bench for McLean on the delayed penalty, took a pass from Brian Glynn at center ice a step ahead of Leetch; with Leetch tugging at him the whole way, Linden skated in and flipped the puck through Mike Richter to cut the lead to 2-1.

Eight minutes and a Richter skate-save on Linden later, and with Dave Babych in the box for tripping Steve Larmer at 12:46, the Rangers scored again.

Officially, it will forever be recorded as Messier 12 (Graves, Noonan) 13:29. Ask any three people, though, and you might get three different accounts of that goal.

Officially, though, Messier gets it. And because of what that goal will become, it's fine, because the symbolism just works better that way. The symbolism works any way you want to slice it (Noonan because of the overhaul at the trading deadline, Graves because it was his season, Messier because he was the Messiah), but it works best for the Captain.

They are the longest 20 minutes of anyone's life. An eternity.

One minute. The Canucks come out hitting, but the Rangers control the puck. Two minutes. The MacTavish line checks hard and gets an icing. Three minutes. Brian Noonan gets stoned by McLean's stick, and later on the same shift just can't push the puck past McLean from the side of the net. Four minutes. The Rangers' aggressive forecheck keeps the puck out of their zone for minutes at a time. But when the Canucks get in, Bure breaks ahead and gets pulled down by Tikkanen at 4:16.

Leetch clears off the draw, but the Canucks gain possession in the zone. Jeff Brown keeps an errant pass in the zone, and a tic-tac-toe play to Linden at the post to Richter's right gives Linden his second goal, this one on the power play, at 4:50. It's a desperate 3-2.

Six and a half minutes. Geoff Courtnall streaks down the left wing and fires a shot that Richter stops and pushes to the corner to his right. Courtnall recovers and centers to a streaking LaFayette. With Kypreos trying to grab him, LaFayette has at least half a net to shoot at. He lifts it about three and a half feet off the ice to the glove side. Had he shot a half-inch left, the game would have been tied. Instead, a nickname is forged from the iron the puck hit.

Six minutes. With Larmer knocked over in the crease, Kovalev nearly beats McLean as the net is knocked off. "Where's the puck?" Sam Rosen screams for the second time in eight games. This time, though, we were asking "Where's the clock?" Why wasn't it running any faster?

Two and a half. Hedican shoots wide on the rush. Two. Zubov clears to center, but the Canucks recover. Lumme keeps an attempted clear. Ronning gets a pass in the slot almost alone, but he doesn't seem ready and can't get a shot off as Zubov recovers. One and a half. The Rangers ice the puck as Larmer is stickless.

Time out, Vancouver, 1:31 remaining. Neil Smith moves from the eyebrow of the Garden to seats in the reds.

Sam Rosen reminds MSG viewers (factoid of the day: this is likely the last ever Stanley Cup Finals series to be shown on local television; the television contract now stipulates that all semifinal and final games are to be shown on either Fox/ABC or ESPN) that the Rangers have blown three last-minute leads in the last two rounds. Thanks, Sam. Of course, if he'd wanted to be particularly painful about it, he could have made this point: in the Devils series, New Jersey scored late to tie the game in Game 1 and Game 7. In the finals, the Canucks had done it in Game 1. The pattern was eerily holding true to form.

Craven wins the draw from MacTavish. Lumme carries down the left side, reminiscent of Leetch's goal in Game 7 of the Devils series; Leetch must be used to it, because he slides to stop Lumme before he can get to the front. There's 1:20 left.

Craven beats Messier. Lumme's shot is blocked. Leetch clears with 1:05. One minute remains as McLean goes to the bench. The Canucks momentarily have seven men on the ice, one of many awful changes in the game. Lumme dumps in with 40 seconds left; Richter stops the puck behind the net, and Zubov backhands it into the crowd. The clock runs down to 36.2 seconds after Zubov's clear, but time, properly, is added back to the clock. There are 37.8 seconds left.

Messier win the draw, to Richter's left, from Linden, and Zubov fires it all the way around from behind the net. It goes all the way down. Jeff Brown chases it as it trickles slowly down; Brown almost stops, and the puck makes it to the goal line.

But it's icing, and Messier and Craven go to Richter's right. Messier wins the draw to the boards, but Courtnall keeps it in. Momesso centers, but it deflects away. The Canucks get it to Bure at the right point for a shot that is blocked to the corner to Richter's right; Geoff Courtnall tries to put it to the crease, but it hits Zubov's skate. Zubov pushes it around the boards; it hits Larmer, who backhands it out of the zone and all the way down the ice as the clock ticked from eight down to seven, six, five, four, three, two...

Sam Rosen screamed. The people at the Garden almost took the roof off the joint. The players on the bench began jumping up and down, as did my father and my brother.

And to make matters worse, they put more time up on the clock. There were 1.6 seconds remaining.

My Dad, who had earlier promised some degree of icky medical condition should the game go to overtime, turned with a deranged chuckle and said, "This is Groundhog Day, isn't it?"

I got the point. Remember the Bill Murray movie? Murray's character, Phil Connors, relives one entire day of his life every day until he "gets it right." Of course. The Canucks were going to keep getting time added to the clock until they "got it right" -- scored. Ah, those hockey gods. What a way to keep a curse alive!

So there is one last eternity -- the eternity before the puck is dropped. Craig MacTavish versus Pavel Bure. Bure tries to push it forward, but MacTavish and Messier tie up his stick and tie up his arms, and MacTavish kicks the puck to the corner. Time runs out on the Canucks. And time runs out on The Curse at 10:59 p.m. EDT, June 14, 1994.

Messier leaps in the air. Players charge off the bench, flinging equipment. Steve Larmer, as always, finishes his check. Alexei Kovalev jumps into Colin Campbell's arms. Messier and Keenan have a long embrace. The Rangers Victory Song is played into the din, meaning something for the first time in 54 years. The Black Aces appear wearing Starter T-shirts bearing the amazing message: 1994 Stanley Cup Champions.

But it wasn't over yet. The celebration is on, but it's still not official.

The teams shake hands, but it's still not official.

Brian Leetch and his 34 playoff points deservedly win the Conn Smythe Trophy, the first American ever to win it, but it's still not official.

Then, the Grail arrives. Commissioner Gary Bettman stands beside it and speaks these words.

"Well New York, after 54 years, your long wait is over. Congratulations to the Rangers and the Vancouver Canucks for a spectacular finals. Congratulations to Bob Gutkowski, Neil Smith and Mike Keenan, the entire Ranger organization, and most importantly, the players. Captain Mark Messier, come get the Stanley Cup."

Messier, the first captain ever acquired in a trade to win the Cup, does so, wildly saluting the crowd to the strains of Tina Turner's "Simply the Best." Messier pauses for a photo opportunity with Bettman, and convulses with laughter and ecstasy. The last flashbulb goes off, and Messier, wearing a Rangers sweater, holds the Cup on his own. Then he lifts it above his head.

It's official. The eternity is over.

The sign says it all: Now I can die in peace.

My other favorite sign of the night was: "Hey Islander fans, now what?"

Here is a video of the Stanley Cup making its appearance on Garden Ice that night: