Next up in our draft preview is defenseman Oliver Ekman Larrson 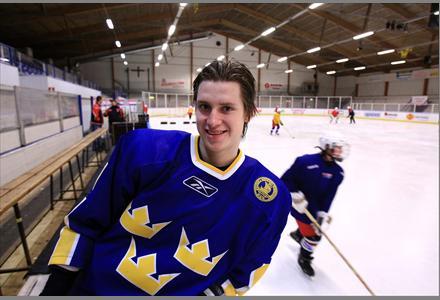 What they're saying: (click the link for the full story)

A member of Team Sweden at the 2009 Under-18 World Championships, Ekman-Larsson was second in scoring among defensemen to teammate Tim Erixon with eight points (2-6-8) in six games, helping Sweden finish fifth.
"Oliver likes to play offensively, often carrying the puck into the neutral zone. He has the frame, speed and skill to dominate. He is a smooth skater and can handle the puck at top speed, but needs to use his size to his advantage more. He often quarterbacks the power-play and has a hard shot from the blue line."

Defenseman Oliver Ekman-Larsson gradually rose up the draft rankings this year as his play got better and better. He's risen so high in fact that it would not be shocking if he were the second European taken, behind countryman Victor Hedman.

A very mobile defenseman with an impressive skating technique. Ekman-Larsson is blessed with good hockey sense, soft hands and impressive puck control. He is a good passer. Could improve his release. He also needs to add more strength and play more physical.