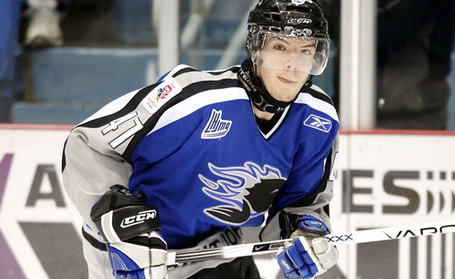 In 2008-09, Després led his team with a plus-16 rating and led the way in defensive scoring with 32 points (2-30-32) in 66 games. He had four assists in four playoff games before the Sea Dogs were knocked out in the first round by Cape Breton.

Top-rated prospect from the QMJHL, Despres has a lot going for him. He's regarded as a top prospect on the blue line who's excellent playing the puck and helping in transition. He was an assistant captain with Team Canada at the 2009 Under-18 World Championships, where he had two assists and a plus-5 rating. He was also a member of Canada's gold medal team at the Ivan Hlinka Memorial tournament in 2008.

19 is a quite a bit lower than some people had Despres projected, and the Rangers will be happy if they can get a player ranked this high this late in the first round.

Here is a video profile of Despres from NHL.com: