Whose On Your Blueshirt?

Share All sharing options for: Whose On Your Blueshirt?

With the offseason officially now ongoing in the NHL, it is safe to say that summer is truly here. The best part about summer for a hockey fan? Everyone's team gets a clean slate, some much needed sun, and great summer deals on all hockey equipment and apparel. I myself will be looking for a nice stick package, along with possibly a jersey. But before we go out and over-spend on new items, I wanted to ask all of you a question; who's on your Blueshirt?

My first Ranger jersey was actually my first communion gift. My parents went the cheap route, though, and didn't personalize my new Rangers's Third Jersey. Did it really matter at the time? Absolutely not. It's a little small today, but I still wear it around and sometimes out to parties (I can pull it off, don't you worry). 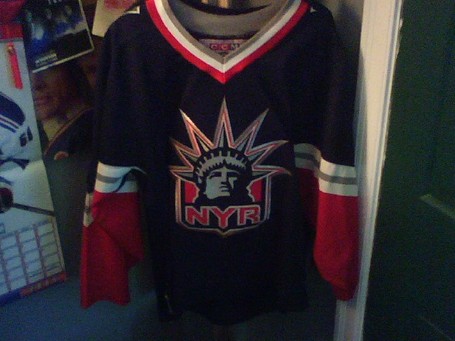 My second Ranger jersey is the one I care about the most and ironically the only one I paid for. Bought for Chirstmas 2007, Sean Avery somehow was lucky enough to grace my jersey. The simple and classic Reebok home blue, it is just big enough to wear when I play pick-up, and just small enough to wear while watching a game (Only playoffs, and with drinking involved to validate wearing the jersey). I was absolutely crushed when Avery bolted for Dallas, and wrestled with the thought of getting it re-stitched for about a year. It was a minor victory in my life when Avery was brought back to Broadway, and I hope he sticks around and has a great year. 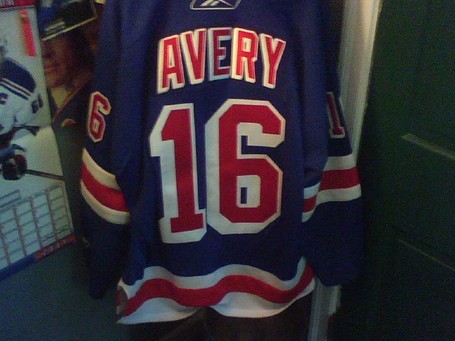 My third and final Ranger jersey was given to me from my Aunt just a little over a year ago. It is an older white home, but it has one of the greatest Rangers on the back, Mike Richter, number 35. It fits very T-shirt like, which is great as I wear it out to social gatherings (i.e. frat parties) and Halloween every year. I've gotten plenty of compliments and have found plenty of Ranger fans out there, but at the same time plenty of ball breaking as well. It's all worth it though, as I actually met one of my ex-girlfriends because of the Jersey. I owe little Mike one. 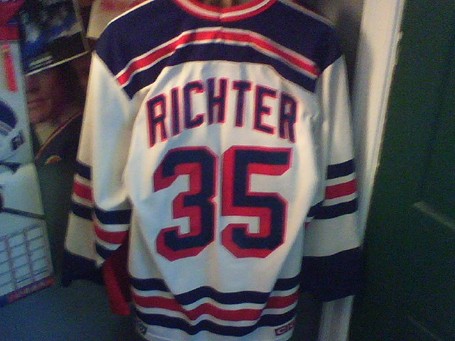 Looking ahead, I'm thinking about a Dubinsky or Callahan Jersey, but that will be in 2-5 years time depending on if they stick around that long. So it's time for your turn, Banter faithful. What kind Ranger jerseys do you have? How and when did you get them? Any special stories behind them? If someone were to buy you a jersey today, who would you get? Still think the NHL should go back to Whites at home (I do)? Let's hear it.