Next up on our NHL Draft Prospect Preview is Evander Kane 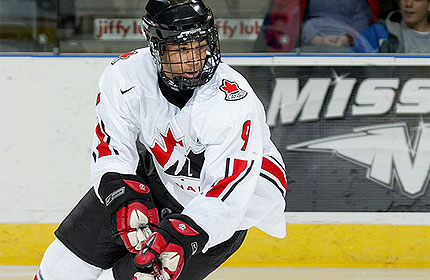 This season, Kane was named to the WHL Western Conference First All-Star Team and competed in the 2009 CHL Top Prospects game playing on a line with Brampton center Matt Duchene and Victoriaville forward Andrej Nestrasil.

Evander is a great skater with a bright future. This year he is playing extremely well. Leading the WHL in scoring. 100 points and a top 10 selection are realistic goals for him. He grew up playing on top teams in the province with the North Shore Winter Club. He has always had success, in minor hockey, and then winning the Memorial Cup with the Vancouver Giants in 2006-07. Now he will hope to have success in the NHL. His best asset is his stick handling. he is amazing with the puck.

Kane is certain to be selected in the first round of the 2009 NHL Entry Draft. While he is a premiere junior, he will need some time to adjust to the speed and size of NHL opponents. While recognized for his offensive prowess, Kane could very well find himself destined for a less prominent, but valuable role in professional hockey. If he is unable to establish himself as a top-six forward and consistent offensive contributor, does he have the fortitude to accept and thrive in a lesser role? Kane has also acknowledged he is ready to assume the responsibilities of a role model if he is chosen by a NHL team located in a largely African-American market.