Next up to be profiled is Brayden Schenn: 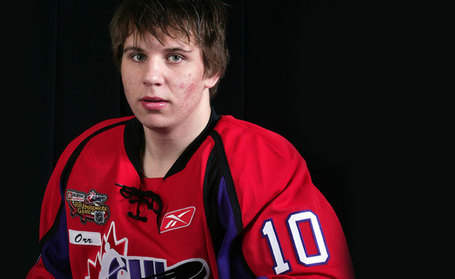 Schenn was named the WHL Rookie of the Year (28-43-71) in 2007-08, after teaming up with fellow rookie linemates Scott Glennie (No. 7 ranked) and Matt Calvert (selected by Columbus, 127th overall in 2008) as one of the highest scoring rookie lines in recent WHL history (193 combined points). He became the first 16-year-old rookie since 1971 to lead Brandon in scoring.

One concern is that his natural chemistry with Glennie may have enhanced his stats as he seemed a little lost when his linemate was out with an injury, but he did adapt to his new cohorts fairly quickly; almost tried to take on too much responsibility. Also, the element of surprise is lost; the WHL is quite aware of the Schenn-Glennie-Calvert line now and will key on them as Brandon's primary offensive threat. It remains to be seen how this will affect the play of Schenn and how he rises to the challenge; it should be handled quite well. While they appreciate his physical game, Wheat Kings coaches would likely prefer him to focus on playmaking and leave the fighting to others. Projects as a Bryan Trottier-type player and will almost certainly be drafted in the top five in 2009. Barring making the World Junior team this season, a 40 goal, 90 point sophomore season is entirely possible.

He's as much a playmaker as he is a goal scorer and he has the size to adjust to the physical play of the NHL. He has incredible hockey intelligence and and uses his blue-collar approach to the game to be as complete a player as possible. He is far from a defensive liability, and his hard work and grit have made him a force on both ends of the ice.