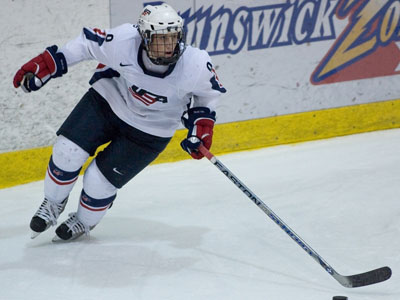 Next up for our draft prospect preview is Jordan Schroeder.

Represented Team USA for the second time at the 2009 World Junior Championships leading the team in scoring with 11 points and tied for second in the tournament with eight assists in six games -- he scored points in each of the six games and became Team USA's all-time World Junior assists leader with 15, surpassing the record of 14 previously held by NY Islanders forward Doug Weight.

At 5'9/180, Schroeder isnt' the biggest freshman in stature, but he may be the most complete. Schroeder is a highly intelligent player that thinks and understands the game exceedingly well. He possesses excellent vision, awareness, and knows where plays will end up. He is instinctive and creative. Schroeder has the ability to make players around him better and his infectious enthusiasm and passion for the game is difficult to miss.

While some may feel that Schroeder's lack of size could hinder his chances of being a top ten selection at the upcoming NHL Entry Draft, he has proven time and again that he is more than capable of competing against bigger and stronger players. Schroeder is remarkably strong on his skates and while he is still growing into his body, the strength that he now has he uses to great advantage. This can be seen in areas such as protecting the puck and his play along the boards. Schroeder has also demonstrated that he can handle the physically punishing aspects of the game as well.

A product of the USNTDP, Jordan Schroeder has excelled in his first year with the Minnesota Golden Gophers. He consistently was one of the team's scoring leaders, playing on a line with recent Avalanche signee Ryan Stoa and Jay Barriball. He finished second in scoring on the team with 45 points through 35 games, while Stoa lead the team with 46 points. More of a playmaker than a goal scorer, Schroeder danced around NCAA defenders all season, leading the Gophers with 32 assists along with his 13 goals. A true freshman, Schroeder has been twice selected to the US U20 World Junior team, leading the team this past year in Ottawa with 8 assists and 11 points through 6 games.