Coming fast and furious now, next up is Magnus Paajarvi-Svensson 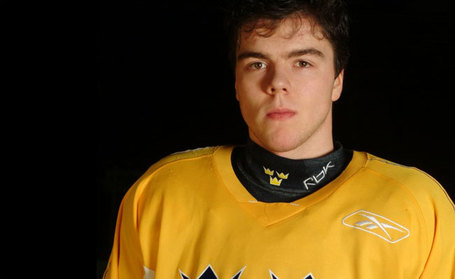 Won back-to-back silver medals with Team Sweden at the World Junior Championships, finishing tied for second on the team with seven points (2-5-7) in six games in 2009. In 2008, he became the youngest Swede to play in the World Junior Championship and the youngest since Sidney Crosby debuted at the 2004 World Juniors. Other 16-year-olds to play in the tournament include: Jason Spezza, Janne Niinimaa, Eric Lindros, Robert Reichel and Wayne Gretzky.

An Extremely fast and fluid skater, and quite possibly the second best player in the 2009 draft. Many comparisons between Magnus and many of the other great Swedes like Forsberg and Sundin who's numbers were comparable at the time. More fairly a comparison between Naslund and Svensson-Paajarvi is a more precise pairing, as his defensive game is not anywhere near the quality of his offensive game. Although he's got a great physical makeup, his style of play ie away from the physical stuff. Aside from that he's a tremendous playmaker and stout goalscorer, putting in quite a few goals, and is adept on the breakaway. He's a guaranteed top 10 pick and may play himself into a top 5 selection.

The name doesn't quite roll of the tongue, especially in North America, but Magnus Paajarvi-Svensson is as recognizable in Sweden as the name John Tavares is here in Canada.