The Rangers, by the way, have made no effort to re-sign Colton Orr, who will have no trouble at all scoring a multi-year deal within hours of the opening of the market. We’re told Florida is keenly interested in the heavyweight. 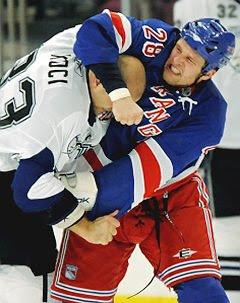 I am not the least bit surprised that the Rangers would pass up on a multi year deal with Orr. The Rangers incompetent management is something that shouldn't sneak up on anyone. If anything it should be expected. Orr is a premier enforcer in the NHL, he can be had for less than a million per season and to any other team would be a valuable asset. Of course I could be getting ahead of myself. It's early and Orr can still be re-signed or at the very least offered a deal. Personally, I will be very sad furious if the Rangers don't re-sign him. There is no reason not too.