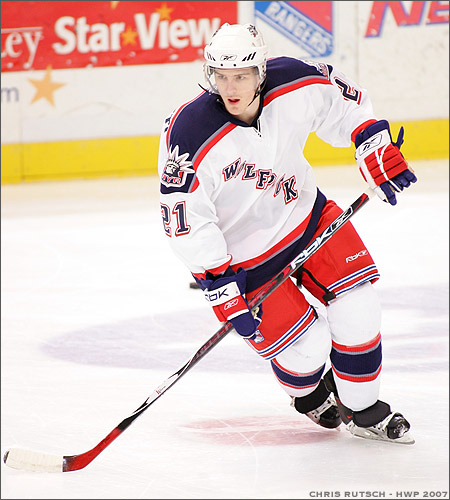 When I got Bobby's email back with the answers to the great questions you guys provided, the first thing that came to my mind was "confidence". He is very sure of his ability, and is ready to do whatever is takes to make it as a New York Ranger. After reading his answers, it wouldn't be wise to bet against him.

Sorry we couldn't use all of your questions, I promise we'll do everything we can to bring you more opportunities like this.

(From Ryan-tmranger) What youth teams did you play on growing up in Jersey?

(From Calad and Ryan) What is it like to have the chance to play for the team you grew up rooting for, and who was your favorite Ranger growing up?

I think the only way to describe the feeling to play for the Rangers is a dream come true. Every kid growing up wants to play in the NHL and on top of that the chance to play for his favorite team. As a young kid my favorite player growing up was Brian Leetch. The way he controlled the play and how he was so dominating on both sides of the puck was what made him my favorite player.

(from brozer) What were some of the factors that lead you to choose the major junior direction as opposed to attending a college and playing in the US?

This might be the hardest question now let alone making that decision when I was 16. It was a family decision that took several days of weighing out the Pros and Cons of both routes and ultimately we decided that the major junior road was the quickest way to the NHL for ME. I express the word ME because for someone else it might work out better to play college and go that route.

(From Joe-Ranger Reporter) How difficult is the transition from the OHL to the AHL?

It was tough at first but just like at any other level when you start to feel comfortable things just become natural. The year I spent in the AHL was huge for me because I was able to learn the game from both sides of the puck instead of being just a one dimensional defenseman. The OHL is almost a completely different style of play then the AHL. When your an elite player in the OHL and playing big minutes you tend to play a more paced game rather then playing every shift as hard as you can. That was the big adjustment I had to make at the pro level because I would pace myself in the defensive zone so offensively I was able to always be involved in the offensive zone. When I realized that I needed to play both ends of the ice I saw a major change in my overall game and what I could bring to the team.

(From Dave BSB) Do you feel you are NHL ready for the start of next season or do you expect to spend some more time in Hartford?

I do feel like my learning experience from this past year in the AHL definately prepared my game for the next level. This is a big summer for me to get bigger and stronger so when I do get to camp there is no reason I can't earn a spot.

(From Dave BSB) Do you see yourself as the power play quarterback that many fans are touting you as?

Since the time I was 10 my game was most dangerous on the offensive side of the puck. Now with my game balancing out and becoming a 2way defensemen I want to be dangerous in all situations. Running the power play has always been one of my strongest assests because not only can I get the quick wrist shot on net but also create room for the players around me by drawing the killers out of position. I do feel like I could contribute on the power play because at every level I've played the power play has been where I excelled.

Thanks again to Bobby Sanguinetti, who was nice enough to answer a request from me, and point me in the right direction for getting this interview done. Also special thanks to Bob Crawford with the Hartford Wolfpack, who helped tremendously in making the necessary arrangements with the Rangers, and thanks to the Rangers for giving us access to one of their young players. Hopefully they will let us do it again in the future.

Finally, thanks to all of you guys, for coming through in fine style with such great questions.