The 2009 NHL Draft is fast approaching, so over the next few weeks leading up to the big day, we will be taking a look at some of the names being mentioned as possible Ranger draft choices.

We'll be checking in with some of the more reputable mock drafts, and along with the other SBNation hockey blogs, we'll be participating in one for James Mirtle's  From the Rink. Our pick is currently scheduled for June 22nd, and after we preview the prospects, we'll have a poll and let you guys help in making the selection for Blueshirt Banter.

We're also hoping to have Jess from The Prospect Park come in and do a live chat and discuss the draft with us.

So we've got plenty planned for the next month, and as always we hope you will check in every day for our continuing off season coverage.

One of the best sites out there for NHL Draft coverage is MyNHLDraft, and they've recently updated their mock draft,and they currently have the Rangers picking C Jacob Josefson. 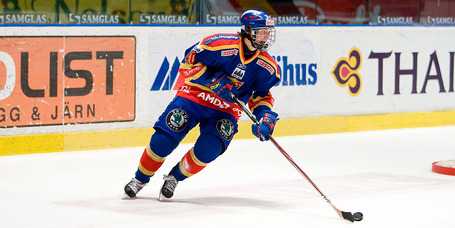 What they're saying: (click the link to see the full story)

Josefsson is a highly skilled center. He plays a strong two-way game is very all-round. Hockey sense is excellent and skating ability and technical skills are very good. Nice creativity with the puck and a skilled playmaker and decent goal scorer. Makes smart decisions and plays a mature game. Gets involved in the rough stuff and has pretty good timing in his hits.

Has a good shot, but does tend to pass too much, which is a product of playing on a team with so many older players, where he defers to their experience.  If he shot a little more, he would score a lot more than he does.  Is being brought along slowly by his club team, who has produced the likes of Mats Sundin in the past.

2007-08: Centered for a number of teams in the Swedish leagues, but spent most of the season with Djurgardens. Scored 31 points (14g+17a) in 34 games. Also represented his country at the U17 and U18 WJC, putting up decent numbers.

Here is a video of Josefsen talking about himself on NHL.com