Share All sharing options for: Rangers jersey: classic or dated?

Yesterday on Puck Daddy, The Two-Line Pass had a story about what makes for an ugly hockey jersey, and I was surprised to see him include the Rangers on this list. I've always felt that the Rangers, along with all the Original Six teams, had one of the best jerseys in the league, a true classic look that never seems dated. 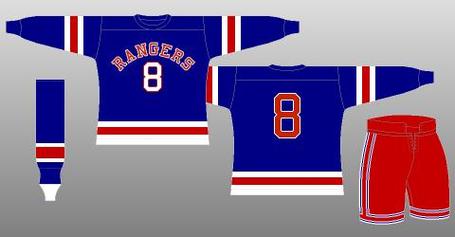 The Rangers haven't changed jerseys much in their existence. In 1946, they changed the style to say "Rangers" arched over the players' numbers on the front of the jersey (pictured above courtesy of nhljerseys.com). The change lasted one year , and the basic style we know and love returned for the 1947 season. The only change made was in 1951, when the NHL mandated that every team have a home and road jersey, and the whites were introduced.

In 1970, the Rangers became one of the first teams to add names to the backs of the jerseys.

In 1976, the Rangers made a complete overhaul to their jerseys, switching to what players and fans often refer to as the "pajama jerseys". The jerseys lasted two years, and when GM John Ferguson was fired, the jerseys went with him, all the way to Winnipeg. 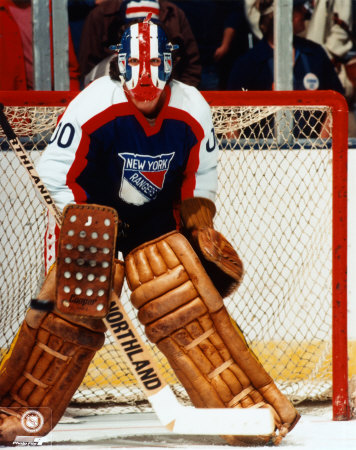 I have a confession to make: I always liked the "pajama" jerseys, and I will tell you why: these were the first jerseys I remember seeing the Rangers wear when I was a kid, so they will always have a special place in my heart. Although seeing Mike Dunham wear one when they brought them back a few years ago was very painful.

In the mid 90's, the NHL began introducing alternate jerseys, or "third jerseys". Some were absolutely hideous, and some were pretty cool. The Rangers blue Liberty jersey was pretty well liked by fans, and in 1998 the Rangers introduced a white Liberty jersey to be worn at home. This is still my favorite all-time Rangers jersey, I just love the look of it. I bought one before the 1998 season, and wore it to the Garden opening night that year. The Rangers hadn't worn it yet, and it drew a lot of attention, I must have had at least 10 people ask me that night where I got it.

The Liberty jerseys have been mothballed, at least for now, and the Rangers continue to wear their blue at home, and white on the road, although our own Rob thinks they should go back to wearing white at home.

Last week the Daily News put Ranger jerseys on their list of the Coolest Uniforms in Sports, so what do you guys think? Do you think Ranger jerseys have withstood the test of time? Or is it time for an upgrade?