Throughout the summer we've been monitoring the Rangers roster and looking at the moves that still need to be made in order to fill the roster and what remaining cap space the team has.

Since the last update there hasn't been much activity in New York, but the Rangers have decided to walk away from Nik Zherdev and the team has since signed Vinnie (or Vinny, or Vaclav) Prospal. Brandon Dubinsky still remains unsigned, which makes it likely that he'll sign the one year qualifying offer that the Rangers made him and he'll make less than $700k this year (10% more than what is stated in chart below). As of now the forwards on the roster seem fairly certain (at least 10 of them) and the two goalies are already determined. The biggest mystery is on the blue line where the only names set in stone are Redden, Rozsival, Staal and Girardi.

The image below (which if you click on becomes larger and clearer) is a list of the players that in my opinion will be on the roster on opening night. The roster below has 11 forwards, 4 defensemen and 2 goalies. At the very least the team still needs to add a forward and two defensemen. Of the two or three defensemen that will be added to the roster at least one of them is likely to be a rookie. 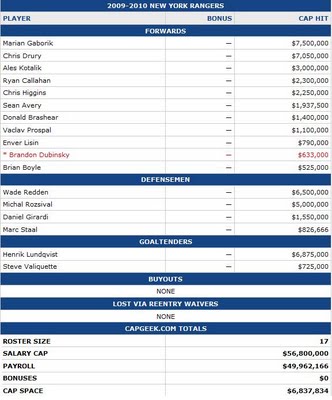 The Rangers have over $6.8M in cap space to fill the remaining three spots in their lineup and carry at least one extra roster player. Matt Gilroy is one of the favorites to make the team on defense ($1.75M). Corey Potter, Bobby Sanguinetti, Mike Sauer and Ilkka Heikkinen are all other possible rookies (all less than $1M cap hit). Will Sather also add a veteran to the blue line, like has been rumored over the past couple of weeks?

I guess these questions will all be answered soon (not soon enough if you're a hockey nut like me!)