Nothing Beats the Classic

Share All sharing options for: Nothing Beats the Classic

Plenty of "NBC" or other signs at the Classic yesterday, but the title above was my favorite because at the end of the day it really describes the event the NHL has put on the past three years.

After the jump: A time-line of the day in Boston along with some tips if you plan on attending the classic in the future. Plus some cell-phone pics of the view.

9 AM: Getting ready and hopping on the T in Cambridge. MISTAKE #1 by Rob: I forget to put on the hiking boots and instead slip on my nearly three year old pair of Dockers (think like American Eagle boots). "I'll be fine" I tell the parents, but my toes end up freezing the whole day.

See the thing that sucks about being in a big city and being 20 years old is you can't do what you really want to do; which is to drink before the game. Sure, there are ways around it, and I could have employed my one way around it, but with two male cousins who are 17 with me, that would have been unfair. Plus, it seems as though everyone ID's harder in the city, and with six months to go before I'm 21 I don't need any unnecessary visits to the Police Department; let alone the Boston PD.

So me and the cousins wander, eat some Hot Dogs, buy some stuff, and eventually make it over to a parking lot across from one of the Fenway gates to a bunch of interactive stuff with that ice sculpture in the middle you see above. Me and my brother see a 2 on 2 NHL 10 area, which we play way too often, and consider waiting in the 20 minute line. But we figured we would be there up until game-time if we got on the sticks because no one would beat us (just kidding... but not really). Everything is getting packed quickly, and the "Let's go Bruins" chants are starting well before the gates even open.

11 AM: Myself and the two cousins grab our tickets from my parents (who are enjoying the absolutely packed bar), and head in. We find the quickest entrance (Center-field at Fenway), and just go look out at the field. I didn't move for a good couple of minutes. I took a picture originally (deleted it), but in the end I feel bad for the folks sitting in the Center field Bleachers. Not high enough to be on top of the play and too far away in general. We walk around the park, eat some more, see some Ranger hats, jerseys, and let the park know that NY has arrived. 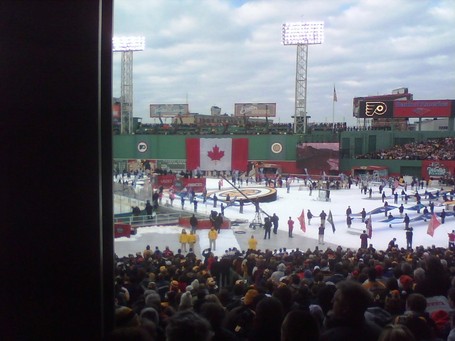 Oh Canada! - Note the Steel Beam on the left side. Fun.

12:30 PM: The buzz is starting. Fenway is about 90% full, and we are in Section 11, Row 3, of the first base side. I told my parents that it would be funny if we ended up behind one of Fenway's steel beams that support the upper-decks, but it isn't funny when we get there. One of our seats is completely blocked by the Section 11 beam, but Mom is a good sport and takes the seat. Everyone is standing for warm-ups, thinking we will be sitting for the game, but no one ever takes their seats until the first intermission. Luckily, some people moved around and we actually hopped down a couple of rows. 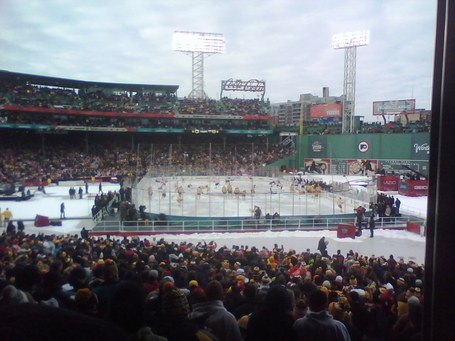 1st Period - End of Game: The scrap is the overall highlight of the first, and the Flyers goal in the second really lowers the buzz. Carrie Milbrook or Millbank (whatever her name is) and her sidekick don't do very much to entertain the crowd between periods, as multiple ice-carving competitions are going on. My cousin said why don't they just get a giant t-shirt gun out, and I can't disagree with him there. At this point I have one tip for future Winter Classic goers: LAYERS. I didn't have a problem with this, but many people around me apparently did. Hockey Jerseys, while obviously needed to show alliances, aren't that warm when you're not sweating in them.

The pressure is building inside Fenway when the third gets going. It's almost as though the park is willing the Bruins to keep up their play, and also influencing the refs into giving the Bruins some calls. The B's score and the place freakin' erupts; now it's a party. It's more of the same when they add the game-winner in OT, and its high-fives all around. We stick around for the team USA announcement, to which I get some Ranger fans around to react with me to the selections of Callahan and Drury. A U-S-A chant follows, and then the scene looked like the picture above.

Overall: In the end, Nothing Beats the Classic at this point. If you want to go, good luck getting tickets. I was lucky enough for my Dad to know a season-ticket holder who was going south for the New Year, and that's how we got ours. Plenty of Philly jerseys and fans around; anytime the "Let's Go Bruins" chant started, the "Let's Go Flyers" chant would go in-between the pauses of the B's chant; it was weird but cool at the same time (constant noise). Layer up if you're going to go in the future, don't forget the boots, and go early if you want to do the interactive stuff and walk around. We got complimentary seat-cushions this year, seeing as the seats at Fenway have been the same since forever.

If it ends up in NY next year, I'll be going again even if I end up in a bar outside of Giants Stadium/Citi Field (Yankee Stadium has committed to a bowl game, unfortunately). With no vested interest in this game (I had a Bruins hat on, and was cheering for them, but it's not the same), I was just glad to see a good hockey game. I can only imagine if the Rangers were out there how different (aka more vocal) it would have been. Also, if you are below the age of 25 to 30 I highly suggest going with friends over family; especially if you're team is playing (Don't get me wrong, but being with your boys at an outdoor hockey game is something that is hard to beat). But still, it's rightly called a Classic for a reason, and if you're any sort of Hockey fan you have to make it to one of these before Mr. Bettman somehow messes it up. One last thing; Hand-Warmers are a necessity whether you are drinking or not! 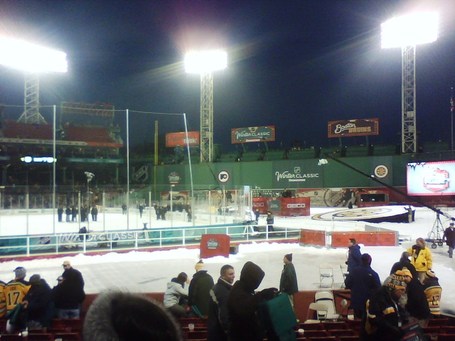 As quick as it started it was all over. Best Hockey game I've ever been to.

P.S: I have a video of the scene in the third period before the over-time. If I figure out how to get to from my phone to the computer via email I'll put it in a fan-post. Hope you enjoyed the piece.

[Note by Jim Schmiedeberg, 01/02/10 11:17 AM EST Travis from Broad Street Hockey and Evan from Stanley Cup of Chowder were provided press credentials for the game, and have some great coverage, make sure you check them out.