Scoring Chances for Game 1 vs Buffalo

Share All sharing options for: Scoring Chances for Game 1 vs Buffalo

As you may have ascertained from some of the comments, I have taken on tracking scoring chances for the New York Rangers. Thanks to the efforts of Vic Ferrari at Irreverant Oiler Fans and timeonice.com, this is not as daunting a task as it could be, merely requiring the time to watch games (having the ability to rewind and watch in slo-mo certainly helps of course).

To answer the question "what is a scoring chance," here's the definition being used

After the jump, you'll find the results of game 1 against the Buffalo Sabres:

Two comments here, you'll note that Buffalo had 7 of the last 9 chances as the Rangers took their foot of the gas with a big lead. The report (and subsequent charts) also ignores Dubinsky's EN goal, which I'm trying to get to the bottom of.

For those additionally curious, here's the breakdown on a player versus player basis for 5v5 only, with the ice time courtesy again of Vic Ferrari's scripts. Special thanks to Derek @ Copper and Blue for the formatting, saving me some tedious work. 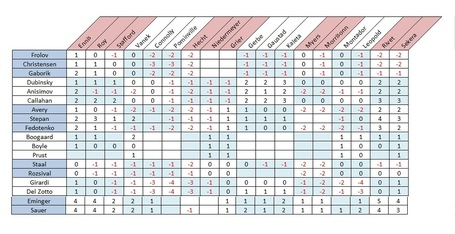 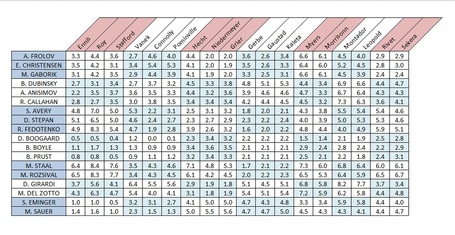 For those curious to take this project on themselves, you can find the scripts here: Scoring Chance Scripts.