Let's all say that to ourselves. I didn't watch the last game so it may be easier to do for me than for others; I think we're hitting the panic button a bit too quickly. You can't predict four games into the season how well we are going to do for the rest. Otherwise, we would have been Stanley Cup champions each of the last two years. There are few things that will get us back to success: time and focus. The roster was pretty shaken up over the last summer, what with the trades, call ups and injuries. For now, we can be confident in the Dubs-AA-Cally line and Stepan's overall performance. If Staal was as bad as you say, lets not worry. One bad game won't erase the 100+ great ones. Most of roster members have never played on a line with each other, we can't expect success immediately. Same goes for Valtank and McD down in Hartford; they'll need time to adjust.

Look at New Jersey for example: they are a team with lots of talent, yet are 1-4-1 right now. However, Parise has yet to get back on form so i wouldn't expect them to stay that way. The performances for the first 6 games will not be indicative of those for the next 76. We, just like them, have lots of time to sort out our problems. St. Louis went from last to 8th in half a season two years ago with a pretty untalented team. Tyler Myers is in a bit of a slump so far, that doesn't mean he won't bounce back. All these people went through rough areas and got through them, no reason as to why we can't do the same. But in the meantime, here a some things we can do to help us chill out:

Not think about how little offense we are creating

Forget about our shoddy defense

Ignore the fact that Eminger is still in the lineup

Refuse to acknowledge that no one is accountable for their actions

Not watch Torts use the wrong type of system (We should use a 1-2-2 neutral zone trap a.k.a. Renney/Lemaire hockey. No point in forechecking hard and not scoring, then being too tired for the back check and letting good shots through. Move forward conservatively, play defense fiercely. The Preds aren't the most talented team, but are doing well because their defense is so solid.)

Not look at the standings and see that Toronto at the top (Wtf seriously?)

Reach for the bottle of Rum

Listen to your wife / girlfriend / grandma / leprechaun in your head (you guys have one too right?) tell you that you're an alcoholic just like your father

Smack her/him/it in a drunken rage

Sober up instantly and realize how foolish you were

Hold her/him/it as she/he/it cries, murmuring "it's all gonna be okay"

Regret your past actions as the shank carves through your ribs

You know where this story is going...

Wait a sec, I feel like I got a bit off track there; for some reason my heart rate is over 170. Oh well, it will all be OK once you look at this monkey Lemur (Thanks for the correction Nevada T): 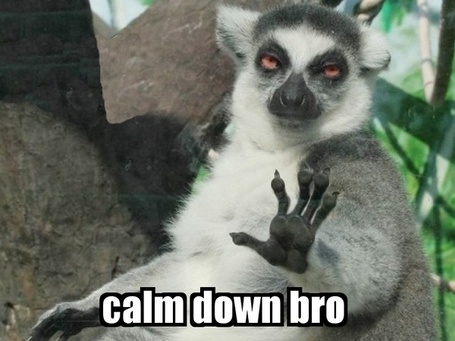