Sheldon Souray's career as an Oiler is officially kaput.  It comes as no surprise to anyone that Souray had already played his last game as an Oiler. At 34 years old, Souray is still a valuable asset.  He's a true weapon from the point on the power play with one of the hardest bombs in the game. He's also physical and plays with a nasty edge. As of right now, there are no takers on Souray with his contract standing at two years and a cap hit of $5.4 million. The fact that not a single team claimed him on waivers signals to Steve Tambellini and the rest of the Oilers management that the only way to rid themselves of Souray would be to put him on re-entry waivers where they would be on the hook for half of his cap hit and salary. If the Oilers don''t want Souray around their youth in Edmonton than likely don't want him with their AHL affiliate in Oklahoma City. He seems destined for re-entry waivers. 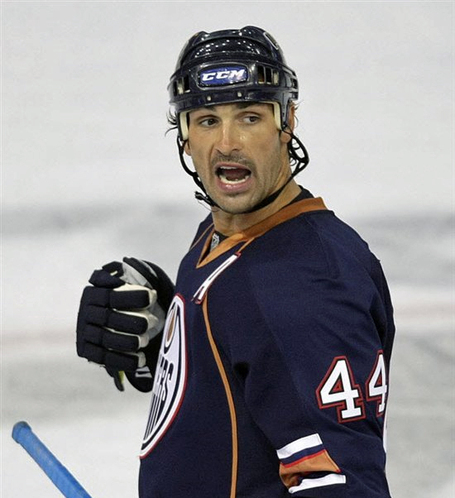 If Souray does in fact get placed on re-entry waivers, I'd hope that Sather would put a claim on him. At that point his cap hit would be a very reasonable $2.7 million - that's essentially Todd White's cap hit who really hasn't played well enough to be on the Rangers roster on opening night.  Souray's cap hit would also be smaller than current Rangers defensemen Marc Staal, Dan Girardi, and Michal Rozsival. With the recent demotion of Wade Redden, with the recent demotion of Wade Redden (felt so good to write that that I had to write it twice) the Rangers are no longer suffocated against the cap.

Claiming Souray would be  a way for the Rangers to improve their team now without sacrificing their future. It would not cost them anything but another check from Jimmy Dolan. Souray is one year removed from potting 23 goals, that's more than everyone on the Rangers from last season with the exception of Marian Gaborik. Souray had an injury riddled season last year which included breaking his hand on Jarome Iginla's face. However, all reports indicate that he's healthy now. Even if he were to lose time to injury over the next two years, at a cap hit of $2.7 million it would not be the end of the world and the Rangers would have enough depth to make due.

With Souray in tow, the Rangers could have a potentially lethal power play featuring him and Michael Del Zotto on the points. He would also add an edge to the Rangers defense that with the exception of Pavel Valentenko is relatively  vanilla.  Keep in mind, thats even if Valentenko makes the team which at this point is no guarantee.

As far as the Rangers young defensive corps go, they could benefit from Souray being on the roster. As of now the only locks for the club are Staal, Del Zotto, Rozsival, and Girardi. After that the third pairing is up for grabs and neither Valentenko, Michael Sauer, Matt Gilroy, nor Ryan McDonagh have played well enough to have a kung-fu grip on a roster spot. Adding Souray allows for two of the three to grow in Hartford and play 25 plus minutes a night, something they wouldnt be able to do in New York even if Souray weren't on the roster.

A concern may be that why would the Rangers want Souray in the locker room if Edmonton is so hell bent on losing him? It needs to be understood that Edmonton is sort of like the morbidly obese kid in gym class, just as he is always last picked for dodgeball, Edmonton is the last place any marquee free agent wants to go. Chris Pronger wanted out and Dany Heatley left them at the alter. It's no surprise that they have a short fuse when it comes to any player disputes.

Souray is not a bad teammate. Had he been on the ice when Dan Carcillo used Gaborik as a punching bag he would have been the first (and only) to jump in. Souray has a problem with management, not the team. He alleged that the Oilers rushed him to play after his shoulder injury, that's a legitimate reason to be angry. Unfortunately for him though, he aired his dirty laundry out to the media so regardless of whether management did rush him or not Souray is going to be perceived as the one entirely at fault. The Rangers can take this opportunity to improve their defense without sacrificing the future and the best part of it all..  they can  stick the Oilers with half the bill.