Scoring Chances for Game 4 vs Colorado

Share All sharing options for: Scoring Chances for Game 4 vs Colorado

In the 3-1 loss to the Colorado Avalanche, the New York Rangers generated their fewest chances overall this year (15), and their fewest chances at even strength (9).   The worst offenders were the tandem of Matt Gilroy and Steve Eminger, both being outchanced 5-0.   The best line, as has been the trend, was the Dubinsky-Anisimov-Callahan combination, who were +2, +3, and +2, and the only forwards in the positive.  The line especially dominated against the Colorado top line of T.J. Galiardi, Paul Stastny, and Chris Stewart at even strength.   Unfortunately, those chances amounted to zero goals, while Stewart was able to capitalize twice on the power play, creating the eventual difference.

After the jump, the results for game 4, courtesy again of Vic Ferrari of timeonice.com

One note, the official game summary lists Michael Del Zotto on the first goal by Stewart, while everyone obviously remembers it was Marc Staal, not Del Zotto that was on the ice.  I adjusted the tables to reflect that discrepancy.

The head to head tables: 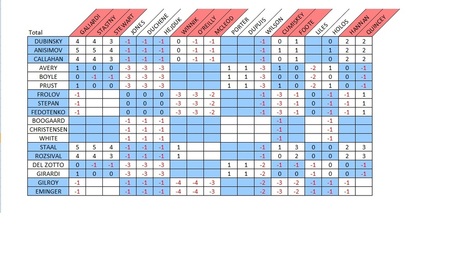 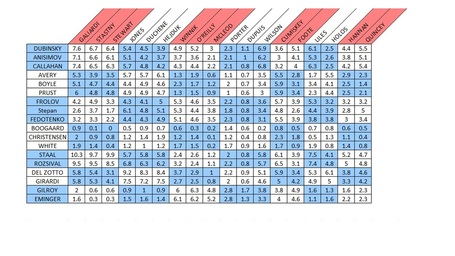