Scoring Chances for Game 6 vs Boston

Share All sharing options for: Scoring Chances for Game 6 vs Boston

If you still need the definition, check here.

The game last night featured the New York Rangers holding the Boston Bruins to just six scoring chances at even strength, and sixteen for the game.   Both totals are the lowest for a Rangers opponent this year.  That's the positive.  The negative is that Rangers themselves had their fewest totals at both strength at well, getting just eight shots at 5v5, and 13 for the game.  For another negative, the team allowed 3 scoring chances while shorthanded, after allowing only 1 chance in the 5 previous games.

After the jump, the full data, courtesy as usual of Vic Ferrari's awesome script.

Two notes here.  First, though it is probably straight forward, the designation "MS" refers to a shot that missed the net.   Secondly, you'll notice Frolov's goal is not listed. His initial shot was blocked, and the subsequent pinballing is what led to the puck going into the net. While fortunate, this does not fit the defintion of a scoring chance.

The head to head tables, which deal with the 5v5 ice time: 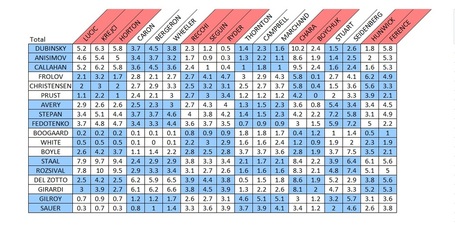 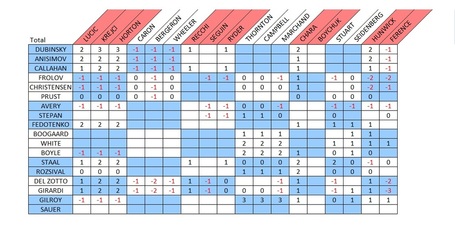