Share All sharing options for: Scoring Chances for Game 7 vs New Jersey

The New York Rangers played two excellent periods against the New Jersey Devils, outchancing the Devils 8-5 at even strength, and 16-8 overall.  They then stood back and watched the Devils pull nearly even in total chances, "losing" the 3rd period 6-1 at even strength, and 8-2 total, registering only 1 chance in the last 17 minutes of the game (16:57 to be exact).  The positive to take out as that the team generated a year-high 8 chances on the PP, albeit in a bit over 13 minutes.  On the down side, the team was unable to control Ilya Kovalchuk, who registered a game high 5 chances and the lone goal of the night.

Top Defenseman: Michael Del Zotto +1 (though +5 on the PP)

After the jump, the full data, courtesy as usual of Vic Ferrari's awesome script.

Two notes.  I erred on the side of caution with regard to Michal Rozsival's goal.  Though it can be argued that the traffic in front, including the deflection, was sufficient enough to cause problems for Martin Brodeur, he did see the shot and was just unable to react to the deflection.  As the shot came outside the area, I let it go.  Secondly, Brandon Dubinsky's 150ft goal is not considered a chance, despite the empty net.

The head to head charts are here: 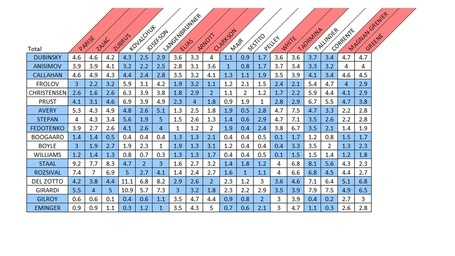 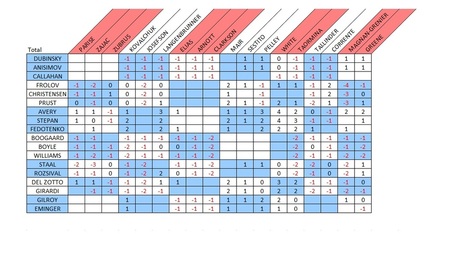