Share All sharing options for: Sean Avery An All-Star?

It seems fitting that after a game that has left us all frustrated and in some cases, pissed off an idea would surface to try and "stick it" to the powers that be. Kevin over at NYR Blog, came up with the idea to try and get Sean Avery into the All-Star Game. Imagine the look that would be on Gary Bettman's face if Sean Avery's name was announced in the starting lineups of the All-Star Game?

Avery would be a write-in candidate. Yes, there are more deserving players on the Rangers. Brandon Dubinsky and Ryan Callahan should both be on the main ballot. But the All-Star game never really has been about who "deserves it". It's a popularity contest that really has lost all of its credibility. So we mine as well try to get the most unpopular player the league has ever known into the mix.

Get on your twitters, update your facebooks, get the word out.

Sean Avery is going to the All-Star Game (hopefully). 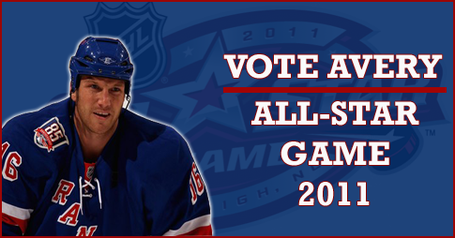