Scoring Chances for Game 18 vs. Pittsburgh

Share All sharing options for: Scoring Chances for Game 18 vs. Pittsburgh

I wanted to make sure I got at least one positive note in, as this game was the polar opposite of the game against the Edmonton Oilers.  The New York Rangers allowed a whopping 32 total chances to the Pittsburgh Penguins, by far and away their highest total thus far.  They were massacred at even strength, 24-10, with 6 of those 10 coming during a 10 minute stretch in the 2nd period that included Erik Christensen's goal.  In particular, the team found no answer for Evgeni Malkin's line.  Malkin himself was on ice for at least one scoring chance against every single Rangers' skater, and only Mike Sauer and Matt Gilroy managed to at least break even against him.  One other positive was that the 1st line (the one with Marian Gaborik) did manage to outchance Sidney Crosby's line when they were matched up.  On to the 'awards.'

The breakdown by score, at even strength:

After the jump, the results for game 18, courtesy again of Vic Ferrari of timeonice.com

For curiosity, the return of the head to head matchups: 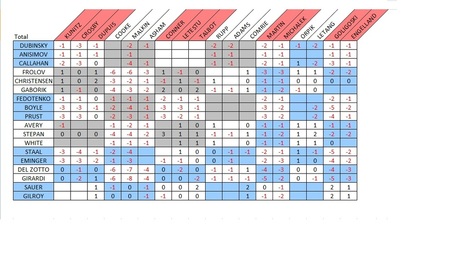