Scoring Chances for Game 35 vs Philadelphia

Share All sharing options for: Scoring Chances for Game 35 vs Philadelphia

The New York Rangers were outchanced 26-15 this game, a stark difference from the first game, which was much more even.  The primary problem that arose for the Rangers was the tremendous depth that exists along the front line of the Philadelphia Flyers.  Each Flyers' line found a matchup which they were able to control, most notably the Danny Briere Line vs the Brian Boyle line.  On a positive note, the Rangers did play even with the Flyers at 5v5 for much of the game, falling off only once Nik Zherdev finally broke the scoreless tie midway through the 2nd period.

The breakdown by score, at even strength:

After the jump, the results for game 35, courtesy again of Vic Ferrari of timeonice.com 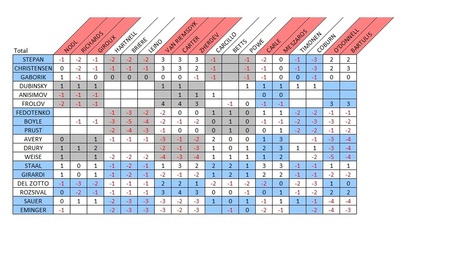