The Rise of Brian Boyle

Share All sharing options for: The Rise of Brian Boyle

A quiet but pleasant surprise for the Rangers thus far this season has been Brian Boyle; who after 35 games played has 12 goals and 17 points all-while being plus 10 as well. Many wondered how this Rangers roster would handle the long-term injuries of Drury and Prospal, and I for one am glad to see the physical monster that is Boyle step up and play the way he was drafted (first round, '03, 26th). Going into this season, however, not many could have expected Boyle to be scoring at a 0.49 PPG rate (as of 12/18/10), as I had him pegged for a total of no more than 8 points. So what has gotten into Brian Boyle, is the question. Per usual, I dove into the numbers and many of them confirmed the solid play that we've seen the past couple of months.

Follow me after the jump for the explanation and a beauty backhand by Brian Boyle.

Boyle is from Hingham, MA, which is about 8 miles east of Quincy and 20 south of Boston. He tore up the High School circuit as a kid, and headed to Boston College in what ended up being a very solid collegiate career. He was drafted out of high school by the Kings, and would end up a Ranger via a 2010 3rd rounder in the summer of 2009. Boyle's main asset at every level of hockey that he has played has been his size; which as we all know makes a huge difference when it comes to any sport when we were all younger. He does have good skills as a natural center, though, and these translated all the way up until he hit the NHL, when he stopped scoring. Because of said size, Boyle was slotted to be a power forward, a player that bangs bodies and plays both sides of the puck. His scoring prowess would naturally follow, the Kings probably figured, as seen below with his NHLe numbers: 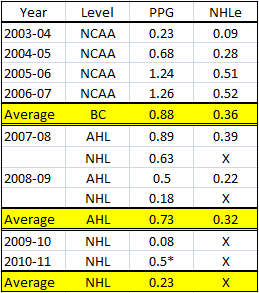 Highlighted are his career averages for each level. According to the numbers, Boyle's average NHL season should be anywhere from 25-30 points. This has not been the case, obviously, and if you take out all of this season he has actually only scored 16 points in 107 games, good for a PPG of about 0.15. Sometimes, talent does go missing in players, but Boyle has managed to stick around as a 4th liner for three years, so why all of a sudden the scoring surge this year? Well, for two reasons as to what I can tell.

With Drury and Prospal having been out for extended periods of time, Brian Boyle has simply been handed more ice-time. Any NHL-caliber player has been a stud at every level they played at previously, so really it comes down to finding the right role and also getting/earning the shot at being a difference-maker. These shots come in different forms, but injuries are certainly one that happens year in and year out for players across all levels of hockey. Let's take a peek at his TOI/60 and the effects it has on his play:

While Boyle did well with his NHL cup-o-coffee in 2007-08 with LA, he was a late season call-up on a team that finished 29th overall in the league. With that said, he was played as a third liner, and given a genuine opportunity to show his stuff, and he did well; scoring 4 goals and 5 points in 8 games. The next season, Boyle was yo-yo'ed back and forth between the AHL and NHL, and was used in a sparingly fourth-line role. The same role was given for his first full season as a Ranger, where he replaced Blair Betts while I bitched about letting Blair Betts walk. Until Drury and Prospal got injured, many thought Boyle would have to battle with Todd White for the fourth line center job and would have a similar, small-impact season once again. With the opportunity, though, Boyle has played well, with his "Rating" (relative plus/minus) ranking third on the team at the moment (min 20 GP), and his Corsi QOT (whose really pushing the play) is positive for the first time in his career.

2. Boyle and his Scoring Touch

Ok, so he's getting more time to show his talents, great. But why has he found his scoring touch again? Well, it definitely helps that Boyle is playing with Fedetenko and Prust; two high-energy guys who play tough and create space by going to the corners. This takes the pressure of Boyle to be that prototypical power-forward and allows him time to shoot. Take a look at the final chart and then I'll explain it in one sentence:

This chart says that Boyle is scoring at his normal rate (meaning not just a sudden rise in shooting percentage), but more importantly Brian is also shooting more and missing the net less. The trends are great, as his shots for have risen every year, and his missed for are declining every year; despite the limited roles he has had in the past (George confirmed this just last week as well). He has already eclipsed his total shots from last year in just over a third of the time, which makes sense given his ice time, but it's also good to see from a development standpoint. Also, just to note, do you see how high his shooting percentage was in that cup-o-coffee stint? While that's great to see, a shooting percentage that high is nearly impossible to keep consistent, so it is not a good indication of a player's true talent and worth. Maybe L.A. saw that one too.

So what does this all mean going forward? Well, for one thing if Boyle continues this pace and plays this well all year he'll most likely ask for a raise seeing that he's an RFA at the end of the season. I would absolutely like to keep him, but only if he's going to stick around in that third-line role with other energy players. This hinges on two things: that he doesn't get demoted when Prospal comes back, and that he actually continues this play. I have a hunch that if he does indeed get demoted to fourth-line duties, subsequently cutting his Time On Ice, he may not continue to put up the points he is now; leading us back to him being a small-impact fourth-liner.

In the end, Brian Boyle is having a bit of a break-out year, and it's good to see. If he keeps up the beauty backhands like the one below, the Rangers will be faced with an interesting dilemma this summer.