As you know, I have arrived in Vancouver, British Columbia and am the "man on the scene" at this year's Winter Olympics for Blueshirt Banter. If you were listening to the radio show last night, you would have heard me call in between periods of the Canada-Norway game and talk briefly about my experience so far. Well, those ten minutes on the phone did not do it justice, so I now present you with Daily Blog Number One here from Vancouver.

First off, I have never seen so many hockey fans gathered together for an event before in my life. Now I have previously been to two All-Star games, many Rangers games, but nothing tops the hockey atmosphere here at the games. Obviously the crowd is Canadian dominated, but even so, the fans here are great and make the experience ten times better. 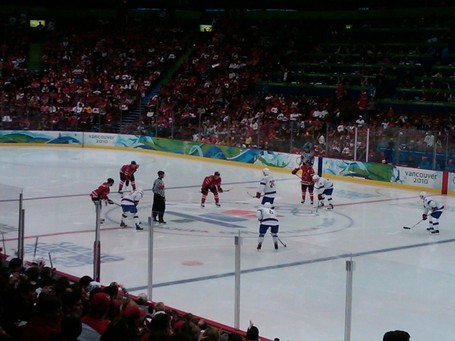 Team USA kicked things off with a 3-1 win over Team Switzerland Tuesday afternoon. Unfortunately, I was only able to catch bits and pieces of that contest because my flight did not have Internet connection as expected, but nonetheless, I saw enough to get a feel for how the United States played. As I said on the show last night, I wasn't overly surprised, and I think the top scorers on the Americans could have been much better, as well as the defensive squad in front of Ryan Miller.

With that being said, they have only had one day to practice together as a team so far, so really not a terrible outing for the United States. Plus, Switzerland is actually a half-way decent hockey team. No, they are not loaded with NHLers on the roster, but they have been playing with each other for over a decade and are one of the better skating squads in the entire tournament.

Much more after the Jump>>

The Canada-Norway game is the one that I attended and I did not leave with one regret, because that was one of the best hockey games I have ever went to. Not just because I got to see the National Hockey League's top stars net eight goals, but because of the fans that were rocking Canada Hockey Place where all of the Men's Hockey games are being held.

When the team took the ice, the arena simultaneously stood up and erupted. They would not sit down until about five minutes into the game, and for those first five minutes, there were fans circling the arena with massive Canadian Flags held above their heads. And then of course when Sidney Crosby was announced in the starting lineup, well, let's just say that he got a very warm welcome from the home crowd.

Every time a shot was taken by Team Canada the entire arena rose and yelled all at the same time. When the Canuckleheads finally found a way to opening the scoring, the crowd nearly launched the roof off of the place with the noise level. I guess the best way to describe the atmosphere in there is electric, but I was asked on twitter to compare it to a Rangers playoff game. I said it was probably five times louder. 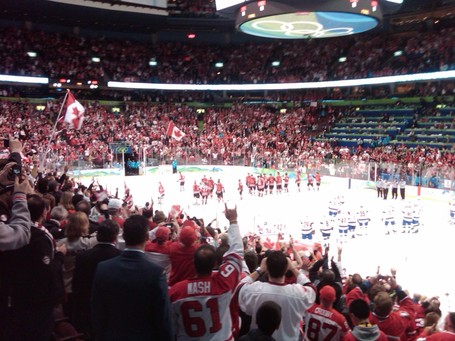 At one point, the "Great One" Wayne Gretzky was flashed on the jumbo-tron as he was watching from an above sky-box. The place cheered just as loud as they did when Team Canada scored a goal, which shows that fans still have a tremendous amount of respect for arguably the best player hockey has ever seen. Right after, the song 'cotton-eyed-joe' came on and a male started stripping and dancing, but we won't go into many details about that.

I also got a chance to attend the Russia-Latvia game, which I found amazing to be able to watch Alex Ovechkin and the Russian stars take the ice. The talent level displayed in that game is indescribable. I was left speechless when I saw the speed and talent of those athletes mixed into one single lineup. The final score was 8-2 in favor of Russia; Ovechkin had two on the night.

I will be back with another daily blog tomorrow, but until then I will be heading over to Canada Place again this afternoon to see our boy Henrik Lundqvist and the Swedes match-up with Team Germany. You can follow my live in-game updates of that game at www.twitter.com/RangersTribune as well as exlusive coverage of the Olympics over at www.rangerstribune.com.