As I watch former Rangers Captain Jaromir Jagr light the lamp for the Czech Republic, I write to you from Vancouver for Daily Blog Number Two. Yet another eventful day at the 2010 Winter Olympic Games in the books and many more experiences to share with readers. If you listened in on the radio show last night you would have heard me explain some of them, but for those who did not, below is basically the rundown of day two in Vancouver.

Hit the streets earlier in the day to check out the Olympic Flame down by the Olympic Village, which is about a 10-minute walk front the hotel. One out of every ten people I passed on the sidewalk had a Team Canada Hockey Sweater on, most of them with Sidney Crosby on the back and a few with Luongo. Otherwise, everyone else had them blank. Some fans still were running around with the Canadian flag draped over their backs. 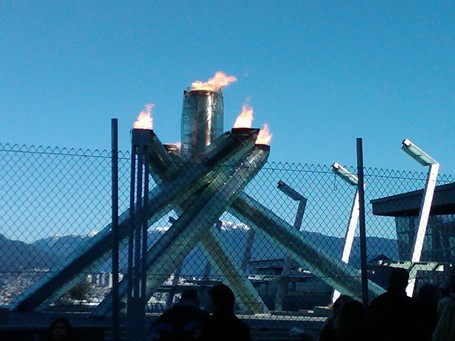 Checked out the local sports stores as well, and while they had a lot of Team Canada and Vancouver Canucks apparel, they also seemed to sell merchandise for many other National Hockey League teams as well. I saw a Rangers away jersey, the white Liberty jersey, and a baby sized jersey. I joked on the show last night that they represented all teams except the Isles, which actually is true. However I did spot a proud fishstick fan wearing their four Stanley Cup Years on the back of his jacket. Yea, not something I would be showing off in Canada buddy, no one gives a rat's tail.

Anyway, the city is still buzzing over the win against Norway on Tuesday night and for what reason? I have no clue. I mean, it wasn't that big of an accomplishment. Unfortunately I will be gone by Sunday, but I am wondering how electric this place will be if Canada defeats USA on Sunday.

More on the Finland, Sweden, and Slovakia games after the Jump>>

Rangers forward Olli Jokinen managed to pick up a goal in the 5-1 Finnish win over Belarus. Now I look at that game and ask myself why in the World Belarus is in this tournament. Do they look forward to getting their behinds handed to them? I cannot find another explanation for it.

Anyway, Henrik Lundqvist lead Sweden past Germany with a shutout in a 2-0 victory at Canada Hockey Place. I attended that game and was glad to be there to cheer on our Henrik. I'll tell you, he will not want to return to the Rangers after playing behind this solid defense for the next two weeks.

Lead by veteran Nik Lidstrom, Team Sweden played some fantastic defense in the game and are now officially the "New Jersey Devils" of the tournament. Great goaltending, smart defense, and capable offense. Sweden is my pick for Gold, but the journey will not be an easy one. 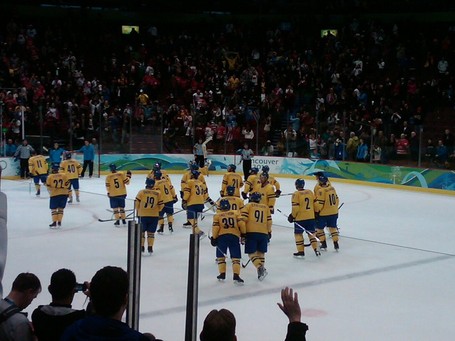 Right now, the Czech Republic is leading Slovakia 3-1 in the third period. Marian Gaborik, who made a last minute decision to play despite a laceration suffered a couple of weeks ago, has the only Slovakian goal on the powerplay, set-up by Marian Hossa. Jaromir Jagr has one of the three Czech goals and has been the best player on the ice in the game, no question about it.

I will be attending the USA vs Norway game on Thursday so be sure to check out my coverage of that game on twitter and on rangerstribune.com.