Not much to say about my third day here in Vancouver unless you want to hear about Men's figure skating. I did, however, attend the USA vs Norway game, and below are my thoughts on the 6-1 American Victory.

Team USA only came to play for a period and a half this afternoon, but it was enough to defeat the Norwegians by the score of 6-1 at Canada Hockey Place. Based on this performance, the United States will have a lot of work to do over the next two days to prepare for Team Canada on Sunday night. I don't think it will be too difficult to get up for that game, but effort will only get you so far. Execution is key and there wasn't a whole lot of that in today's contest.

Boston Bruins forward Phil Kessel got the U.S. on the board early in the game when he roofed a wrist shot off the crossbar and in on the breakaway. A Ranger to Ranger connection followed that up to give USA a 2-0 lead when Chris Drury banged home a Ryan Callahan rebound in front. The Unites States got many more chances in that period but were not able to convert, so two - nil would be the score entering intermission. The final shot count was 15-2 in favor of Team USA. 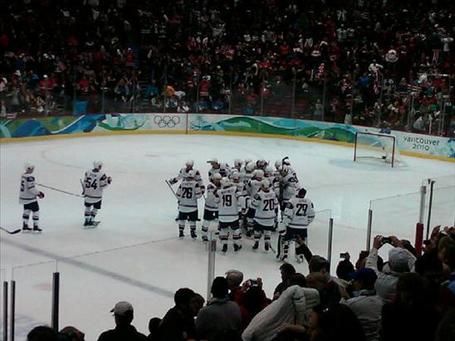 The second period of this game was uninspiring for the U.S. to say the least. They had zero energy, they were lazy, and the turnovers were abundant. Blackhawks star Patrick Kane scored the only goal for the Americans in the period, depositing a Zach Parise rebound. Actually, the Norwegian goal had that shot gloved originally, but dropped it, leaving the puck sitting there for an open Kane.

More after the Jump>>

The United States powerplay, which is run by Blueshirts head coach John Tortorella, then allowed a shorthanded goal to the Norwegians. I think this startled the Americans a bit as they started to frantically scramble in their own zone. It also put a shock into the crowd because they were being overpowered by "Let's Go Norway" chants by the wise guy Canadian fans in attendance. This period exposed the U.S. defense, which is not looking too great up to this point.

The third stanza was when things exploded as the United States scored three unanswered goals. The first was started by goaltender Ryan Miller who sent out defenseman Jack Johnson. Johnson's rebound was batted in by Ryan Malone. Just after that, Zach Parise fed a pinching Brian Rafalski for a one-timed tally. Rafalski was not done, however, as he later blasted a shot from the point which put the Americans up 6-1.

I thought Rangers forward Chris Drury was one of the better U.S. players in the game, scoring a goal and creating multiple scoring chances with fantastic passing. Ryan Callahan was also a standout in this game, as he was thrown onto the ice by head coach Ron Wilson when the team needed a physical spark. Callahan gave them just that in addition to a few shots and an assist. An overall great afternoon for the two Rangers representatives.

Zach Parise, Patrick Kane, and Phil Kessel were the best forwards for the U.S. in this game, in my opinion anyway. Kane is probably USA's most valuable player on offense and watching him live gives you the opportunity to see how quickly he can move with the puck.

In addition to Kane as very valuable to the team is goaltender Ryan Miller. Miller had to be sharp often in the second period and he was just that, making some tremendous saves.


Their next game will be on Sunday when they face Team Canada, who came close to losing to Switzerland, but pulled out the win in a shootout.