Vancouver Olympics Daily Blog: This is any Country's Tournament

Share All sharing options for: Vancouver Olympics Daily Blog: This is any Country's Tournament

I have learned and seen a lot over the past week, following each and every Olympic Hockey game played here in Vancouver at Canada Hockey Place. The experience, as I have said, was incredible and will be something I will think back to often later in life. I have seen many teams, many players, and many styles of play during my stay, and to be honest, do not know if I have ever watched so much hockey consecutively before. Anyway, one thought among many I will leave Vancouver with is that this tournament can be won by any team that wants it.

There is no favorite anymore. There is no country that is already set in stone for the Gold Medal.  It simply cannot be looked at that way after taking into consideration the match-ups and the results we have seen so far in the Olympics this year. This is anyone’s tournament and I think it will boil down to goaltending and all around execution and effort. 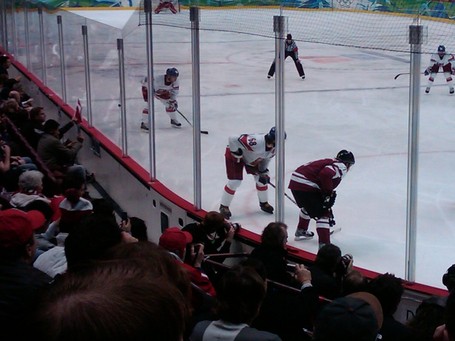 Canada was a shot away from losing to the underdog in Team Switzerland. The Slovakians, led by Pavol Demitra, upset the stacked Russians, who are now leading the polls on my site as the favorite to win Gold. Belarus came awfully close to coming back against team Sweden yesterday, but ended up falling 4-2 thanks to a late goal by Daniel Alfredsson. And then it was Latvia playing a tight game with the Czechs.

There may only be one total upset on that list, but the other games came extremely close to re-enacting what Slovakia did to Russia. I think a lot of it may be due to the underestimation of opponents. That is a major problem with the Rangers, and when this was the case, they usually got taught a lesson. No team in any sport deserves to be underestimated, let alone in the Olympics.

More after the Jump>>

Sunday’s games will set the table to for the rest of the tournament. Sweden is taking on their rival in Team Finland, while the United States and Canada clash later that night. In both contests, one team will be favorited and one team will fill the role of underdog. I think it is pretty clear who is who here. Sunday is not a medal round day, but it will certainly feel like one.

On that note, I would just like to thank each and every one of you for visiting the site and reading my articles in addition to reading my tweets while I was in Vancouver. I had the time of my life and I would not have loved for anything more than to share the journey with you, and allow you to experience Olympic Hockey.

I am a proud American, no doubt about that, but I must say that the people here in Canada are incredible. First off, they are extremely kind and caring, for the most part anyway. Secondly, EVERYONE knows and follows their hockey. The streets buzz after wins, they are gloomy after losses. Believe it or not, whatever the hockey team that takes the ice does, sets the mood for this city. I really enjoyed being a part of that.

The coverage does not stop here, though, as I will have the exact same coverage of the remainder of the tournament that I have had up for the past week. Of course, the only difference is that it will not be covered live. Now, I jump on the plane and back to New York I go!